Cannibals in the Trenches

Time for a History Geek first, I’m blogging while traveling by bus from Christchurch to Dunedin. I haven’t used this Word Press app on my ipad before so apologies in advance for any poor formatting or embarrassing autocorrected text. So what is the topic of choice for my first bus blog post? Cannibalism, propaganda and the First World War.

I had the idea after reading one of the comments on my last post, when I shared a Xmas card sent by a New Zealand serviceman serving in France in 1918. Matthew Wright mentioned that there was another more humorous card known to have been sent by Kiwi forces that year. He is right, and I happen to have a copy of the card he mentioned so I thought I’d share it with you all today.

It is a little sensitive in nature but I think it provides a unique insight into the humor and attitudes of the time.

The card refers to a report that German command told their troops that if they allowed themselves to be captured by New Zealand forces on the Western Front that they might risk being eaten. 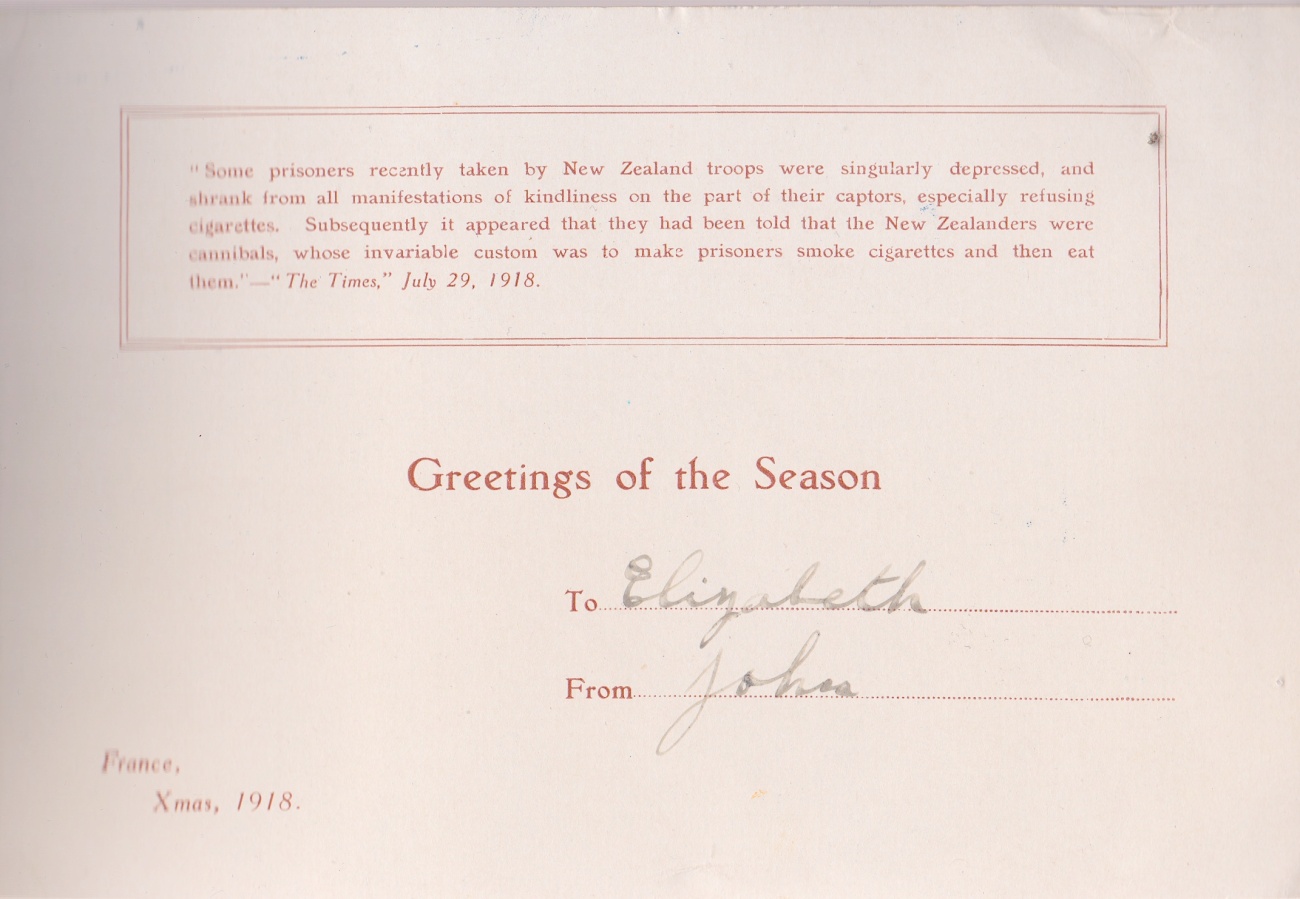 For my non-New Zealand readers, it is common knowledge that the indigenous Maori people of this country once practiced cannibalism. It is a controversial and sensitive subject which I doubt I’m qualified to wade into in detail. Historian Paul Moon tackled the subject in This Horrid Practise. I recommend his work as a starting point for anyone interested in contemporary views on New Zealand’s cannibal past.

If the rumor is to be believed then it appears that German command may have spread word of Maori cannibalism to their troops, perhaps as an attempt to demonize the enemy or to discourage them from surrendering. New Zealand’s history of cannibalism was well known throughout the 19th century, although almost certainly misunderstood. If the spreading of the cannibalism rumor was a deliberate act of propaganda by the Germans then this card is evidence that it backfired and boosted the moral of New Zealanders in the trenches.

Further evidence is this photograph as used on the cover of Matthew Wright’s history of the New Zealand Division on the Western Front.

Here is another photo, this time claiming to show a group of New Zealand soldiers reading an article in a German magazine which may have been the source of the cannibalism rumor.

This along with the Xmas card is pretty clear evidence that the New Zealand soldiers were amused by the accusations! Do any of my readers happen to know the magazine that featured the article? It would be fascinating to try and find the original source to see what foundation the rumors were based on.

Further evidence can be found on Papers Past in this issue of the Evening Post, 1st August 1918

The men are being told that the New Zealanders are ‘cannibals, so that there is no use surrendering to them, and it would be better to fight to a finish. “The first thing they will do to you if you are caught,” said an officer recently, “is that they will offer you a cigarette. This means that you are marked to be killed and eaten..” At least one of our recently captured prisoners believes this story, and sure enough as soon as he was taken a New Zealander offered him a cigarette, and he considered himself a doomed man. He arrived at Headquarters in a terribly agitated state, and it was some time before he could realise that he was not going to be the piece de resistance at a New Zealand soldiers’ banquet.

The newspaper report, photographs and Xmas card all date to August/September 1918. The New Zealanders had a fearsome reputation on the Western Front but certainly never engaged in cannibalism. I’m curious to find out more about the original source of the rumor but that aside it seems that both the Germans and the New Zealanders used it for propaganda in different ways. The Germans used it to discourage their troops from allowing themselves to be captured alive and the New Zealanders used it to have a good laugh, even sharing the joke with those at home through their Xmas card.

I hope you are all enjoying your holidays.