It’s in the Bag

Today I’m going to share an iconic bit of New Zealand television history.  As far as televisual Kiwiana goes this is right up there with Thingee’s eye and little Ted’s severed head.  Well okay it might be a little below them on the awesomeness scale, but it is interesting nonetheless.

Usually I restrict my collecting to items that relate to particular topics of interest and are pre-1950.  This is purely a logistical exercise as without some sort of limitation I’d quickly end up as an interviewee on “Hoarders that Nearly Died III” or a similarly named television reality show.  However I do break that rule occasionally when something catches my attention and this is one of those items.  I spotted it on TradeMe a year or so ago and instantly knew it was a must have. 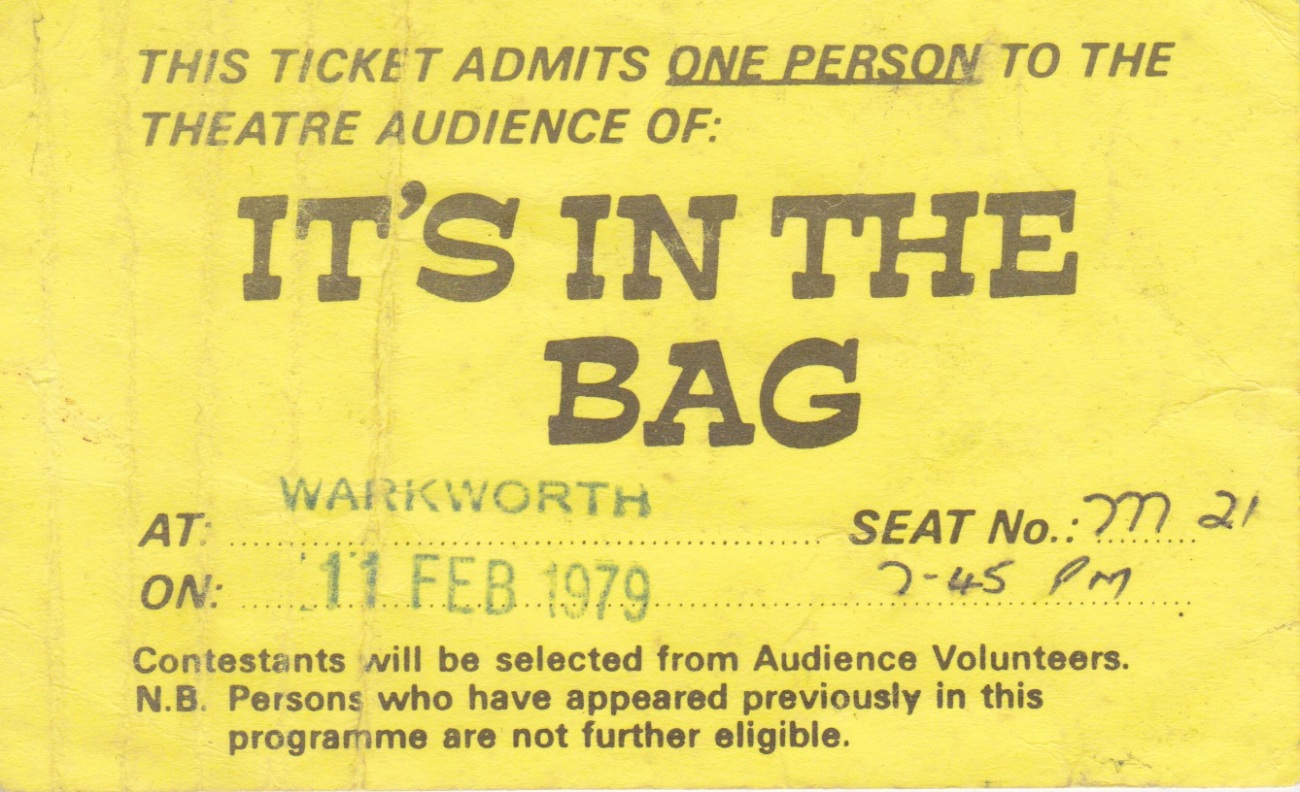 For my international readers (or those too young to remember), ‘It’s in the Bag’ is one of New Zealand’s most iconic television shows.  It straddled the golden age of television, originally beginning as a radio show in the 1950’s, jumping to the small screen in the 1970’s and finally coming to an end in the early 1990’s.  Like most television shows the concept was simple.  Take one flamboyant personality (in this case Selwyn Toogood), travel to small towns, let locals either win big or make a fool of themselves on stage, add a few catch phrases and you’ve got a sure-fire hit.  That recipe hasn’t changed too much to be honest.

In this instance it wasn’t a talent show – although there were plenty of those in the early days of television, don’t be conned into thinking the ‘Got Talent’ or ‘Idol’ series is a new invention.  All that is different is that modern talent shows have a Starbucks-esque branding and a marketing campaign that closely resembles the London Blitz.  I digress, and fervently apologise to Blitz victims.  ‘It’s in the Bag’ wasn’t a talent show, but it had all the same drama of winners and losers without the pain of having to listen to them sing.

Contestants were drawn at random from the crowd and invited up on stage where they were asked various questions, fell victim to a couple of friendly jibes and were then presented with a conundrum.  They were offered a choice between a bag with a voucher for a prize of unknown value in it and a wad of cash.  At the presenters discretion the sum of money would increase until the live audience were screaming and for one last time the question was asked of the overwhelmed contestant, “Will it be the money or the bag”?  Some walked away with the major prizes (usually white-ware) while others faced national humiliation by turning down a then small-fortune only to be awarded a booby-prize such as a banana.

If you are sitting there buzzing with nostalgia or wish that you were still able to experience such a visual manifestation of pure jeopardy then NZOnscreen has a treat for you.  They have a complete episode available for viewing online!  Just click this pretty button….

This episode was filmed in 1974 at Dunedin’s Mayfair Theatre (which by chance I happened to walk past today.  Small world).  If you have the chance to watch it I particularly encourage you to watch the second clip which is packed with gems such as:

Joan, a soft-spoken Dunedin woman in floral garb tentatively walks along the stage to the microphone.  She stands awkwardly just out of frame and the cameraman pans to compensate.

Selwyn:  What drug Joan, is obtained from the poppy?

The computer programmer that follows Joan is also amazing.  Firstly because she busts Selwyn’s presumption that she is a nurse and secondly for walking away with a potato peeler as a booby prize while shrugging it off with a line to rival the best of any script writer… “We needed one in the flat anyway”.  That right there is pure television gold.

There is no doubt that ‘It’s in the Bag’ is legendary in the annals of New Zealand television history.  So that is why I broke my own “nothing from after 1950 or you’ll end up having a hoarder intervention” collecting rule and snapped up this ticket when it came up for sale.  Despite ‘It’s in the Bag’ running for decades, with hundreds of people attending each episode and total audience attendance that must run into the tens of thousands I do wonder how many tickets were kept.  A few for sure, but I’m expecting most of them ended up starting fires or as a yellow stain in the landfill, a perfect example of ephemera.

Along with the ticket came another to a less iconic but still memorable game show.

I remember watching Mastermind as a youngster.  Probably while sitting on a beanbag, wearing my embarrassingly short shorts, a fluro-coloured sweater of some description and donning a bowl cut, doing my best to drag myself out of the 1980’s and failing miserably in the process.  You can watch it by clicking the button below.  Mastermind that is, not me in the 1980’s.

As a professional visual-historian of sorts I know how much value can be gleamed from archival gems and this episode of Mastermind is no exception.  Look out for specialty topics which include ‘Fawlty Towers’ and ‘Dreadnaught Battleships and Battlecruisers from 1906’ (That guy is seriously amazing!  How can a North Canterbury farmer in the pre-Wikipedia age possibly know that much about battleships!?!?!?).

By the way I have to give a huge shout out to NZOnscreen who continue to do a fantastic job making New Zealand’s television history more readily available.  I recently met the woman who clears all the relevant rights for these old shows and wow, what an amazing job she does wading through that antiquated paperwork.  Decades old television rights trails are not for the faint-hearted.  Trust me on that!

There is a reason that I’m sharing some television related ephemera, today marks ten years since I started working at TVNZ.  One decade and over one hundred shows later and I’m still looking for new ways to share old but awesome stuff with new audiences.  To help me celebrate go watch something cool on one of the links above.

Update:  Good news, Maori Television have now taken over the reins and are currently producing their fifth season of their version of It’s in the Bag!  There are a couple of shows being shot this week so get in and experience some live Kiwiana!