As a collector of interesting old things it is natural that Christmas related items frequently fall into my hands.  I often find examples that fit well in my collections of maritime, military and New Zealand historical ephemera, photos and postcards.  This Christmas postcard happens to also be from one of my favourite holiday retreats – Ulva Island.

Ulva Island is situated in the heart of Stewart Island/Rakiura’s Paterson Inlet.  Today it is a bird sanctuary but a century ago it had another claim to fame.  It was home to what was billed as the southern most post office in the world.  The Paterson Inlet post office ran from 1872 until 1923 and during this time it became a popular attraction for tourists who would eagerly send a message from the famous post office.  Not just on postcards, but also leaves!

This isolated location seems an odd place to act as a communications hub but the rational was sound.  When the mail bags arrived a flag was raised up a pole on the highest point of the island, alerting settlers all around the inlet who would then row over to collect their mail and packages.  I imagine this was a journey that might have been particularly depressing for those who seldom received any correspondence.  For some, the sting of having received no Christmas cards must have been further exasperated by the long lonely row back across the inlet.

The original postmaster led an interesting life.  Charles Traill was born in Orkney in 1826, studied at the University of Edinburgh to become a lawyer before seeking adventure overseas, first as a sheep farmer in Australia and then in California during the gold rush before establishing a mercantile firm in Oamaru.  Having traveled the world he seemingly decided to settle on the edge of it, opening a store and then a post office on the remote Ulva Island in 1872.  Shortly after arriving there he married a local woman, Henrietta Jessie Bucholz, who tragically died only a few years later.

Charles was a pioneering botanist, sea shell collector and naturalist, and thanks to his efforts the future of the island as a nature sanctuary were already in motion before his death in 1891.  His story reminds me a little of that of Felix Arthur Cox, another adventurer and pioneering botanist who also lived on a remote New Zealand island.  I’ve previously blogged about Cox and a remarkable photograph he took of three waterspouts.  Sure enough, according to this article published in the New Zealand Botanical Society the two island dwelling naturalists seem to have been buddies.  I’m not too surprised.

In the 1890’s and early 1900’s increasing numbers of tourists visited Traill’s picturesque island in Paterson Inlet.  At this time, tourism in New Zealand was an industry still in its infancy but steamship tours of Stewart Island and Fiordland were billed as an experience to rival the thermal wonderlands of the north.  Ulva Island’s natural beauty and its quaint post office were a highlight for many of these southern tourists, some of whom were greeted by Charles’ brother Walter, who had inherited the responsibility of running the store and post office.

This previously unpublished photograph of the Paterson Inlet post office is from my personal collection.  I’m not sure who the woman next to the doorway is, perhaps a tourist posing for the photographer, but I wonder if the gentleman patting the dog might be Walter.

“Ulva is interesting not only because it contains the most southerly post office and store in the world; nor because it is inhabited by one man – Mr Walter Traill – who lives there Robinson Crusoe-like with his dogs and the birds in the bush; but also because there the bush can be seen and enjoyed in all its virgin beauty”

Since first publishing this post a reader got in touch with another, much clearer, photograph of the same gentleman, in the same doorway, and once again giving attention to his canine companions.

Gentleman (suspect this could be Walter Traill) with dogs at Paterson’s Inlet Post Office.
Photo courtesy of The Lothians

Thanks to Donald from The Lothians for giving permission to reproduce this image!

Walter really does seem to have picked up where his brother left off – he displayed a similar passion and curiosity for the natural world.  He collected minerals, gemstones and moa bones, all of which he would proudly show visitors.  ‘A woman in the Antipodes and in the Far East’ (1914) by Mary Hall includes an entertaining account of a visit to Ulva Island along with a description of Walter (who she describes as ‘The Solitary One’) assembling a whale skeleton on the beach:

“Everywhere the Solitary One went, he was accompanied by the odour of the whale, indeed he seemed saturated with it.  Later in the day he told us he was not quite up to the mark, and he wondered if the whale was proving too much for him.  We thought it likely”.

The natural wonders of Ulva Island are still a popular attraction for tourists today. Water taxis ferry birdwatchers and sightseers across Paterson Inlet to Post Office Bay.  The old postmaster’s residence is still there, although it isn’t open to the public.  Today the main attraction on the island are the walking tracks through the pristine bush and the thriving population of native birds.  Kaka soar above making their primeval racket; saddlebacks, tui, rifleman and bellbirds watch from the safety of the foliage, kereru woosh overhead, cheeky weka try and make off with even the most well guarded of picnic lunches and my personal favourite, the seemingly fearless and thoroughly adorable Stewart Island robin.  Kiwi can also be found there, although I’m yet to spot one. 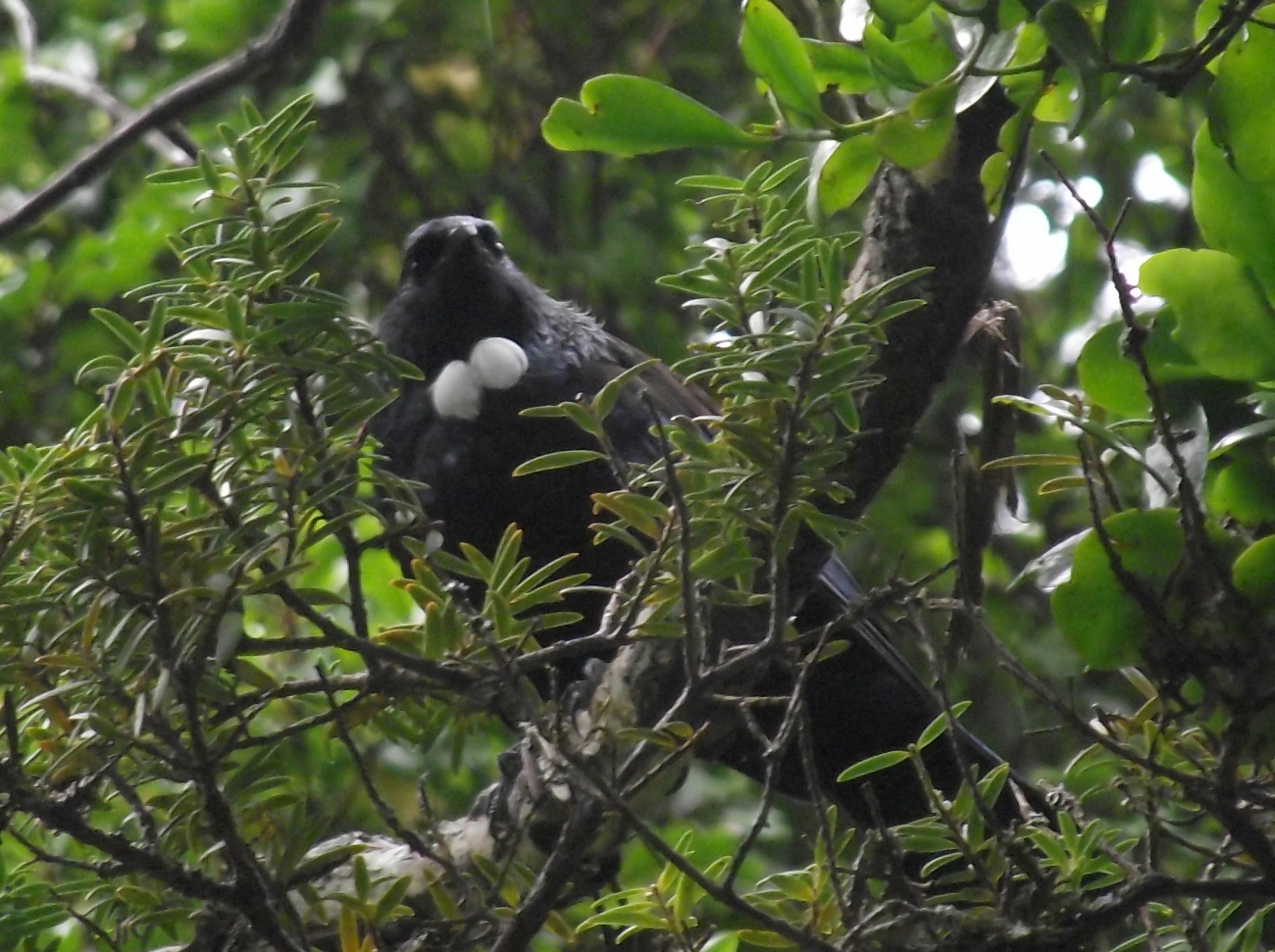 The island offers a small snapshot of what New Zealand’s forests were like before the arrival of humans.  This is a magical place where time seems to have all but stood still and Post Office Bay remains as quiet and tranquil as it was a century ago.  You can easily imagine the early settlers arriving by row-boat to collect their mail. 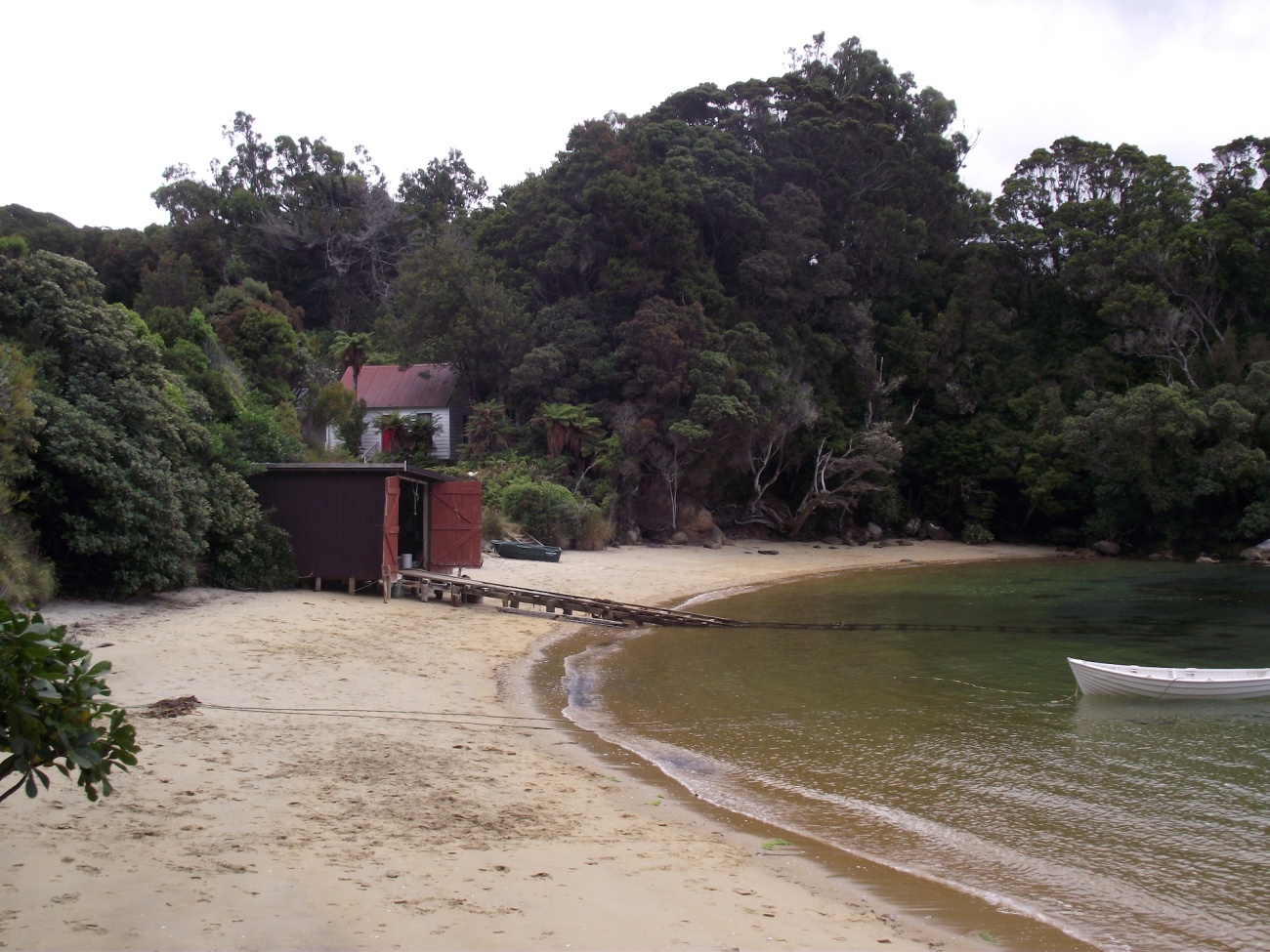 On a nerdy postal history note – the accuracy of the ‘southern most post office’ claim is debatable, and certainly by the mid twentieth century there were a number of post offices further south.  My grandfather was an assistant postmaster on the opening day of the Campbell Island Post Office on 1st September 1952 and by then mail was also being sent from Antarctica – where the southern most post office can be found today.

Today the legacy of the Traill brothers and early sightseers to Ulva Island continues in the form of New Zealand’s proud conservation movement and thriving tourism industry.  Perhaps also we can see in the Ulva Island Christmas postcard an early example of the search by New Zealanders for imagery to replace evergreens and snow-covered scenes with pictures that better reflect what it is like to celebrate the holiday in the southern hemisphere – at a time of year when we like to get outside, enjoy the long days and warm weather, visit picturesque islands and explore nature.