This evening marks one hundred years since curious spectators in Auckland craned their necks to witness one of the first flights in New Zealand made by a Government owned aircraft.  Joseph Joel Hammond of the Royal Flying Corps was at the controls of the ‘Britannia’ and in the passenger seat, perhaps the most sought after seat in the country, was Miss Esmee McLennan, an actress.  This was the day when Auckland had its own ‘Come Josephine in my Flying Machine’ moment, only her name was Esmee, not Josephine, and the pilot was about to get into a whole heap of trouble over it.

January 28th 1914 was far from the first time that an aircraft had flown over the city.  Other aviation pioneers had put on shows over the city during the previous year including the enterprising “Wizard” Stone and Frederick Sandford who took the daughter of one of the aircraft’s co-owners up for a flight – earning her the distinction of becoming the first woman to fly in a heavier than air aircraft in New Zealand. Hammond had also taken the Britannia for a few trial flights in the preceding weeks, including a flight out over the Waitemata, tipping his wings in salute to several ships of the Royal Navy.

This was a time when aviation was new, exciting, seemingly death-defying, and it certainly captured the minds and imaginations of the public.  The dashing young pilot also attracted attention – some of which would soon cause him problems.  He had previously set aviation records in Australia, and before that had prospected for gold in Alaska and toured with Buffalo Bill’s Wild West show.  I really like this guy!

The Britannia was a Blériot XI-2, a variant of an early monoplane that less than five years earlier had made history by becoming the first aircraft to fly across the English Channel.  I’ve been fortunate enough to see one flying myself, at the Warbirds over Wanaka air show in 2000.  It was a beautiful sight, the Bleriot flying slowly enough so that the adoring crowd could plainly see the pilot waving his gloved hand as he flew overhead.

The trial flights of the Britannia on 17th and 18th January 1914 became an event in their own right and resulted in newspaper headlines such as ‘Our Aeroplane’, ‘First Flight in Dominion’, ‘New Zealand’s Airship’ and my personal favourite, ‘Aeroplaning at Auckland’.  The Britannia was the hot topic of the month and a fantastic asset for the organisers of the Auckland Exhibition – with flights over the Exhibition grounds billed as an exciting draw-card.

J.J. ‘Hammond may have had the best seat in the city but those on the ground also had a unique opportunity to be aviators for a moment – and even be photographed ‘flying’ over Auckland in their very own flying machine.  Exhibition visitors, presumably for a fee, could have their photograph taken in an aviation themed studio.  The resulting images, now in archives, postcard collections and family albums, survive as a unique record of this exciting time. 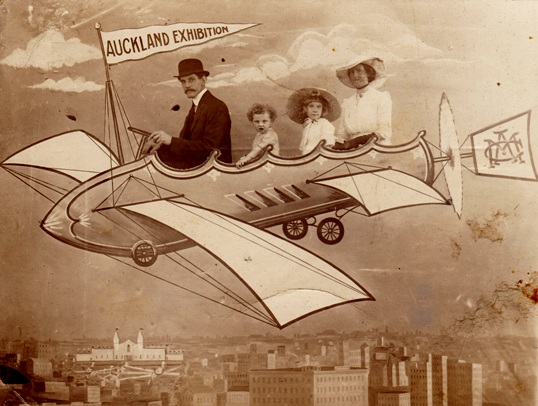 This photograph is particularly unique in that the individuals are identified. The “pilot” is William F. Barnes of Wellington.  His wife Ellen Barnes is in the back, and granddaughter, Marion Hannah, and her mother, Florence Hannah nee Barnes, are in the middle.
Image kindly supplied

Everyone wanted to be in on the action and many individuals vied for the opportunity to take to the skies as a passenger in the Britannia on her next flight.  Such a privilege must surely belong to a politician, a mayor, or someone of similar public importance – well not if J.J. Hammond had anything to do with it – on a whim he invited an actress from a touring pantomime group.

Miss Esmee McLennan was an Australian performer travelling with the Royal Pantomime Company, starring at the time in productions including “Little Bo-Peep” and “Old Mother Hubbard”.  As luck would have it she was staying at the same Auckland hotel as J.J. Hammond, and upon discovering that he was an aviator asked if she might accompany him on a flight.

She was the envy of many when at about six o’clock in the evening on 28th January she was invited to climb into the Britannia and take to the skies over Auckland.  Her experience is best expressed in her own words, as published afterwards up and down the country in this beautiful account:

“It was like just nothing I’ve ever experienced before, and so it’s quite hard to tell a real story about it.  Mr Hammond is staying at the same hotel, and I expressed a wish to go up if ever he felt inclined to take a passenger.  The aviator was not quite sure about the Britannia when it came to carrying a passenger, however, and he would make no promise.  On Wednesday I went out with others of our party, after visiting the Exhibition, to see Mr Hammond fly.  It was an absolute surprise to me when he said, ‘I’ll take a passenger; will you come?’  I didn’t wait to be asked twice, and at once got into the passenger’s seat.  I honestly didn’t feel the least wee bit nervous.  On the contrary, the feeling I was most conscious of was one of pleasurable excitement.  And, do you know, the first feeling, once away, was how simple and safe it was.  I’d somehow pictured aviators as having to be tied in, or having to hold on tight.  On the Britannia I never even thought about being frightened, or of being anything else but comfortable and pleased.  The machine left the ground so easily, and we mounted into the air so naturally, that it somehow seemed to inspire confidence.  It is surprisingly difficult to analyse now what my sensations were.  I only know that I was wonderfully elated, and that I just enjoyed every moment of it.  From your volcanic cones I have often looked out over Auckland, and thought it the loveliest place in the world, but viewed from an aeroplane, at a height of nearly 2,000ft, it was like a glimpse of something almost unreal.  The city itself looked big enough, but the houses, and the people seemed like those Gulliver must have met with on his famous travels.  We were travelling faster than I have ever travelled in the fastest express trains, but there was not even the slightest vibration, nor was there any sensation that was other than entirely pleasant.  When we can actually journey from one place to another without the fatigue of train travelling or the drawbacks of a sea voyage, how delightful it is going to be.  When we descended it was all just equally simple, and apparently equally easy.  Coming down the water chute two hours before, my friends had teased me because I was actually scared.  Coming down to earth from the skies on the Britannia never gave me one nervous thought.  We landed as skilfully and as easily as we went up.  I’m sorry I can’t describe by experience in more graphic terms, but I’m a woman, and I can best express myself when I use a woman’s phrase, and simply say it was ‘just lovely’.  I was more elated while in the air than I think I’ve ever been about any first-night success at the theatre, and I really think I’m more excited about it now, when it’s all over, than I was while actually in the air.”

Accounts claim that the flight lasted for about twenty minutes, and ascended to a height of at least one thousand feet.  A fairly impressive joyride by any measure.  Later that evening during the interval at her pantomime performance Esmee was awarded with a bouquet of flowers and the goggles and cap she had worn during the flight.

The fall-out from Hammond’s decision to take an actress as a passenger included severe repercussions; he was effectively given the sack, future flights were cancelled and serious people, who probably had moustaches, demanded that the Britannia should be grounded permanently, dismantled, and put into boxes, where it remained until it was sent back to Britain at the outbreak of the First World War.  Thus ended the short career of New Zealand’s first military aircraft.

Esmee returned to Australia where she continued to work as an actress, retiring sometime before the end of the war.  She married conductor William Quintrell.  I haven’t been able to find any photographs of her so if anyone knows of any then please let me know.

J.J. Hammond continued to fly with the Royal Flying Corps.  Sadly this remarkable, yet often forgotten, New Zealand aviator was killed when his plane crashed during a war bonds promotional tour in Indianapolis, September 1918.  No family ever came forward to collect his remains, which in a compassionate gesture were interred in the family plot of local businessman and co-founder of the Indianapolis Speedway, Carl Fisher.  It seems a sad but fitting grave for this pioneer and adventurer.

Hammond’s few short flights over Auckland marked the start of a century of military aviation in New Zealand and likely inspired many aspiring pilots to follow in his footsteps.  Today his controversial flight with Esmee is remembered in the form of a replica of the Britannia on display at the Air Force Museum of New Zealand in Wigram, Christchurch.  If you visit the museum, which you really should, then you’ll see a mannequin representing Joe Hammond in the pilot’s seat of the Britannia, and in the back, with hand on her hat, is Esmee McLennan.

Note:  There are different spellings of Esmee’s surname, including McLennon, McLellan and McLennan.  I’ve opted for the latter as this is how her name was spelled in newspapers back in her home state of New South Wales.  To learn more about Esmee and her fellow Australian performers head on over to the fantastic Australian Variety Theatre Archive.  I was thrilled to discover the site while researching this post and the curator was a fantastic help.  Also I should mention that a book has recently been published on Joe Hammond’s career – I haven’t had the opportunity to read it yet but I look forward to, and if you are interested in learning more about this early aviator then you should check it out.

Thanks also to all image contributors.