To start the new year on History Geek I’ve put together a list of some local and international historical anniversaries to watch out for over the next twelve months.  Some are well-known, but I’ve included a few lesser known events as well.

50 Years ago – In 1966 Radio Hauraki challenged the NZBC’s control of the airwaves by broadcasting from a boat outside New Zealand’s territorial waters.  That same year the NZBC commissioned a new television show – Country Calendar, which is now the longest-running television series in New Zealand.  The Waikato Museum is hosting an exhibition commemorating 50 years of Country Calendar and TVNZ have commissioned both a 50th season of the show as well as a special documentary celebrating the milestone.

100 Years ago – The New Zealand Expeditionary Force became the New Zealand Division and left Egypt for France, arriving in April and first entering the trenches of the Western Front in May.  In September and October they suffered about 8000 casualties during the Battle of the Somme.  Also in 1916, the New Zealand Mounted Rifles Brigade saw active service in Sinai.

The WW100 official theme for 2016 commemorations of New Zealand’s experience during the First World War is ‘Transition – A National War Effort’, which will look at the impact that the war had on society at home while also continuing to mark the key actions that New Zealanders were involved in overseas.

100 Years ago – As New Zealand troops arrived in France, another conflict occured back at home when armed policemen mounted an expedition into the remote Urewera Ranges to arrest Māori prophet Rua Kēnana.  A shot was fired, by whom exactly is still debated, and the resulting gunfight lasted for half an hour.  Two Māori men were killed and another two were wounded, as were four of the constables.  Kēnana was accused of sedition, but was only found guilty of resisting arrest.  The message from the government was clear – independence was not to be tolerated. 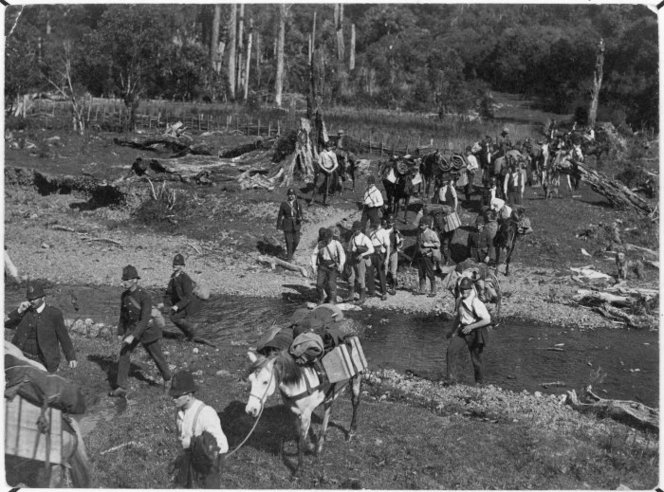 150 Years ago – Five men were robbed and killed by highwaymen along the Maungatapu track between the Wakamarina goldfields and Nelson.  The villains responsible were apprehended – Burgess, Sullivan, Kelly and Levy.  Sullivan gave evidence against the others in exchange for a pardon but the other three were found guilty of the murders and on 5 October 1866 were hanged at the Nelson Gaol.  It remains one of the most notorious crimes in New Zealand history.

150 Years ago – On 14 May 1866 the General Grant was wrecked at the bottom of a cliff on the largest of the Auckland Islands in the Sub-Antarctic.  The stricken vessel was swept into a large cave.  Her cargo included over two and a half thousand ounces of gold from the Victoria goldfields.  Ten survivors were rescued after eighteen months of living as castaways.  Despite many attempts to find the wreck and her valuable cargo it has never been located.  The General Grant is New Zealand’s most well-known yet elusive treasure wreck. 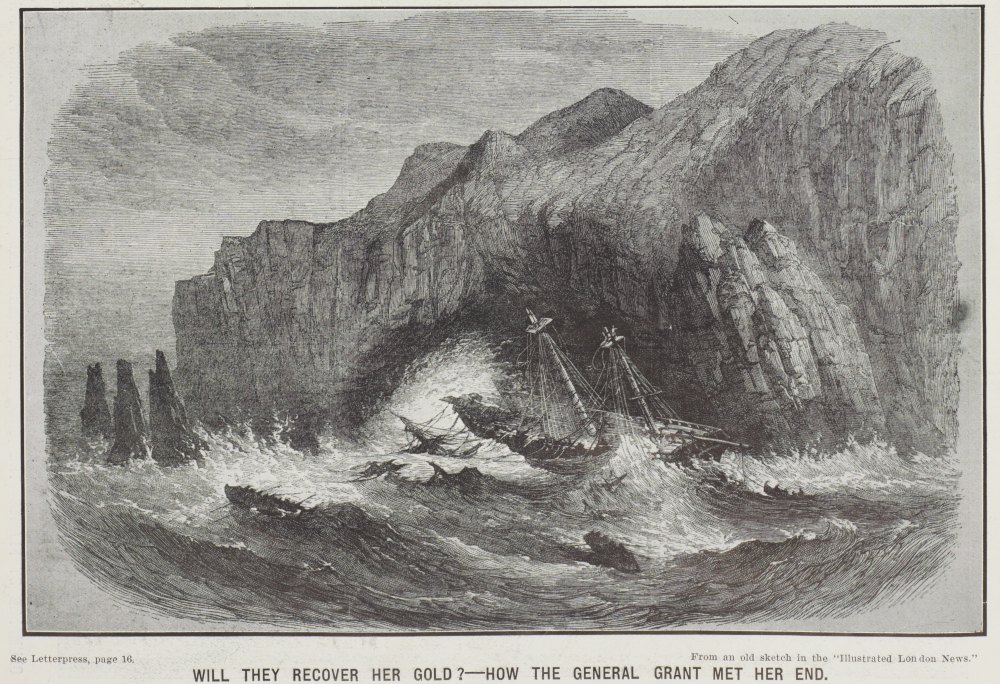 175 Years ago – 1841 Was a busy year for one of the British Empire’s most recent additions.  Auckland replaced Russell as New Zealand’s capital, new settlements were established at Nelson and New Plymouth and George Augustus Selwyn became the first Anglican Bishop of New Zealand.

This absolutely stunning portrait of Selwyn was painted that same year, by English artist and cricket enthusiast George Richmond.  The Archbishop of Canterbury consecrated Selwyn as the first bishop of New Zealand at Lambeth Palace Chapel on 17 October 1841, and in December he embarked on the long voyage to his new home on the far side of the world.

The 1841 portrait of Selwyn was sold in 2010 by one of his descendants through an auction house in the U.K. and was purchased by the Alexander Turnbull Library.  Another portrait of Selwyn was painted by Richmond in 1855, and can be seen at Selwyn Coilege at the University of Cambridge.  George Augustus had studied at Cambridge and even competed in the inaugural Oxford and Cambridge Boat Race at Henley on Thames.

100 Years ago – Between 1 and 12 July 1916 five swimmers were attacked in a series of shark attacks along the Jersey Shore. 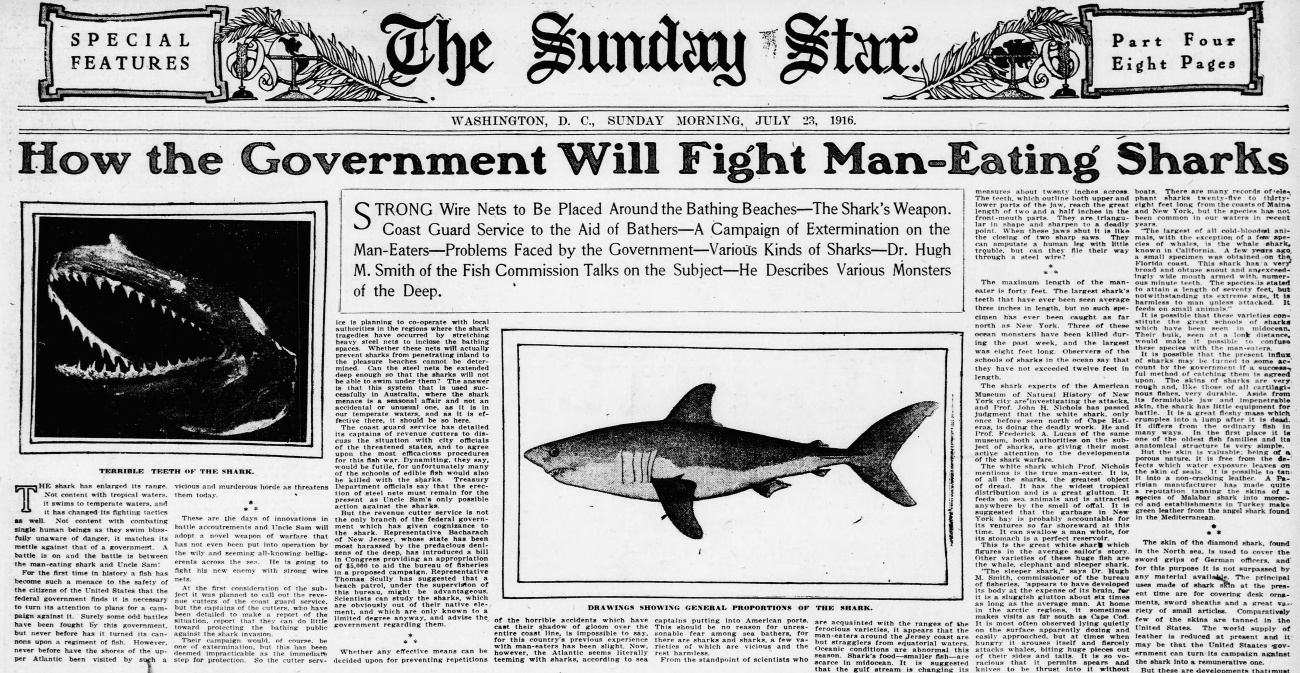 The telegraphs and newspapers spread news of the horrific attacks, inciting fear and hysteria along the East Coast and cementing the reputation of sharks as man-eating monsters.  Fifty-nine years later the New Jersey attacks were referenced in Steven Spielberg’s ‘Jaws‘.

100 Years ago – The 1916 Summer Olympics didn’t happen.  Berlin was to host the games and had completed a stadium by 1913.  When war first broke out in 1914 it was hoped that the conflict would be over in time for the games to be held, but by 1915 it became clear that the Olympics would have to be cancelled.  Many of those who were to compete in the games instead found themselves fighting for their lives.

200 Years ago – Summer didn’t happen.  Well it did, but thanks to the 1815 eruption of Mount Tambora in the Dutch East Indies (now known as Indonesia) global temperatures decreased and the Northern Hemisphere’s summer of 1816 was so bad that it resulted in significant food shortages.  It is often referred to as “The Year Without a Summer”.

200 Years ago – Perhaps partly due to the poor weather, a group of friends spent most of their summer holiday at Lake Geneva indoors.  To pass the time they put pen to paper and held a competition to write the scariest stories that they could imagine.  Lord Byron wrote ‘A Fragment’, which inspired another one of the guests, John Polidori, to write ‘The Vampyre’.  Mary Shelley’s story, about a conflicted scientist who creates a monster, would become her first novel – ‘Frankenstein; or, The Modern Prometheus’.

500 Years ago – Henry VIII knighted Brian Tuke, the recently established ‘Master of the Postes’.  This was a formulate moment in the history of the Royal Mail.  Initially its services were reserved for royalty but in 1635 Charles I made them available to the public.  Royal Mail and the British Postal Museum and Archive have launched this fantastic website to commemorate the 500th anniversary.

Those are just a few of the many interesting historical anniversaries to watch out for this year.  Are there any others that you are intending to commemorate?