A very special ship is celebrating a big anniversary today. The Cutty Sark is one of the most famous tall ships in the world, a tea clipper that won the admiration of so many for her speed during one of the most exciting annals in maritime history. She endured storms, collisions and, in more recent years, a catastrophic fire, but she survived it all and today she celebrates her 150th birthday! 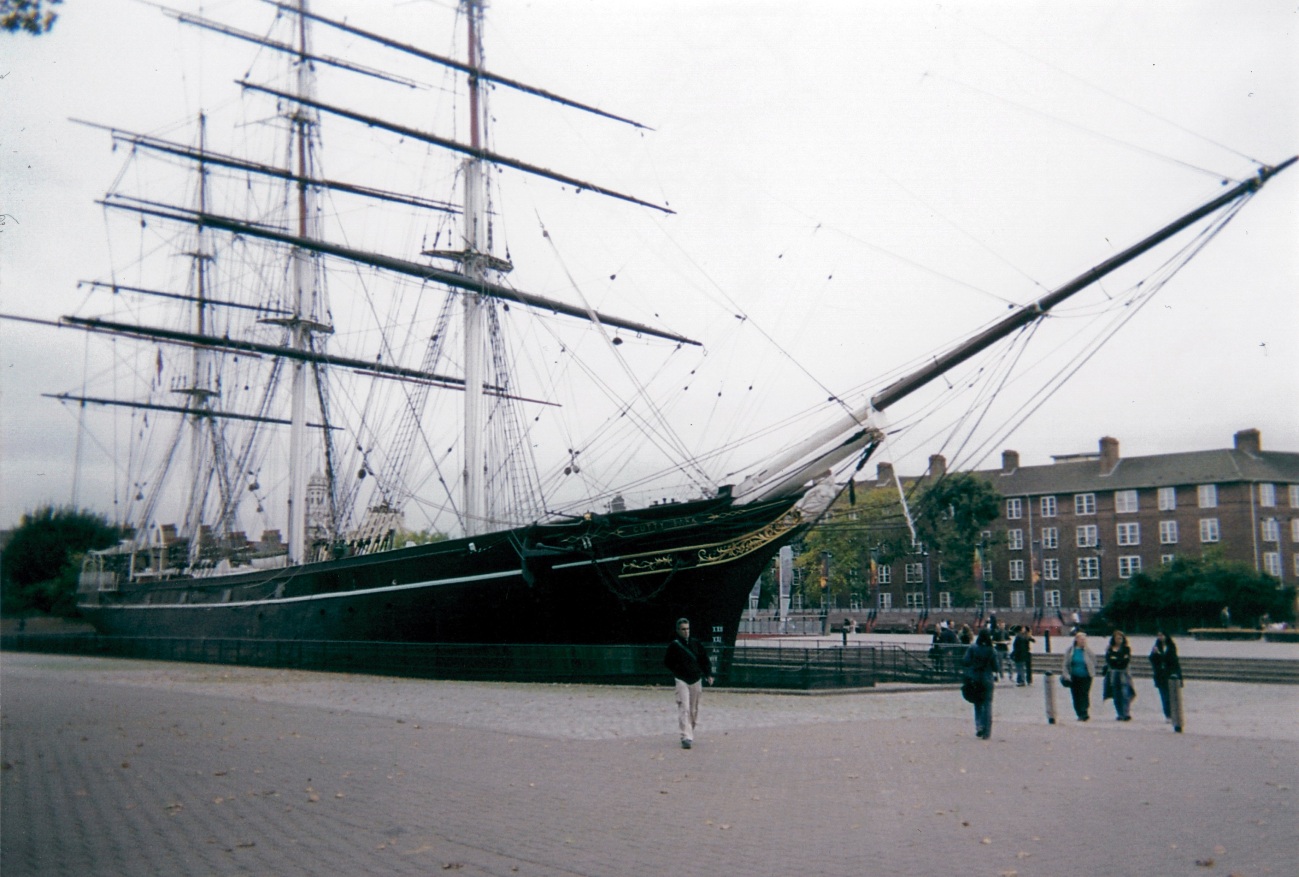 Robert Burns’ ‘Tam o’ Shanter’ (1790) tells the story of a drunk farmer called Tam who encountered a coven of witches and warlocks dancing at a haunted church, with the devil playing the bagpipes. Most the witches were withered beldams and rigwoodie hags (Burns’ words, I’m sure they were lovely once you got to know them) but Tam was bewitched by the beauty of a winsome wench called Nannie Dee, a witch who was wearing a tight-fitting short undershirt called a ‘cutty sark’.

That, while a lassie, she had worn,

In longitude tho’ sorely scanty,

It was her best, an’ she was vauntie.

“Weel done, Cutty Sark”, the farmer yelled in passion. A fateful mistake, one should never betray your presence to dancing witches. The coven gave chase as Tam made his getaway on his horse, galloping towards the bridge over the River Doon, knowing that witches can’t cross running water (everyone knows this, right?). But the witches were quick and chased him down, with Nannie ‘Cutty Sark’ Dee leading the hellish legion. The swift witch reached out for him just as Tam made it to the bridge, the man escaped with his life but his poor horse lost its tail to her clutches.

On 22 November 1869, the Cutty Sark was launched on the River Leven, Dumbarton, Scotland. This Scottish witch was fast like her namesake, but this witch had no qualms about crossing water and the longitudes she would sail were ample. She was destined to become one of the most famous sailing ships in history. 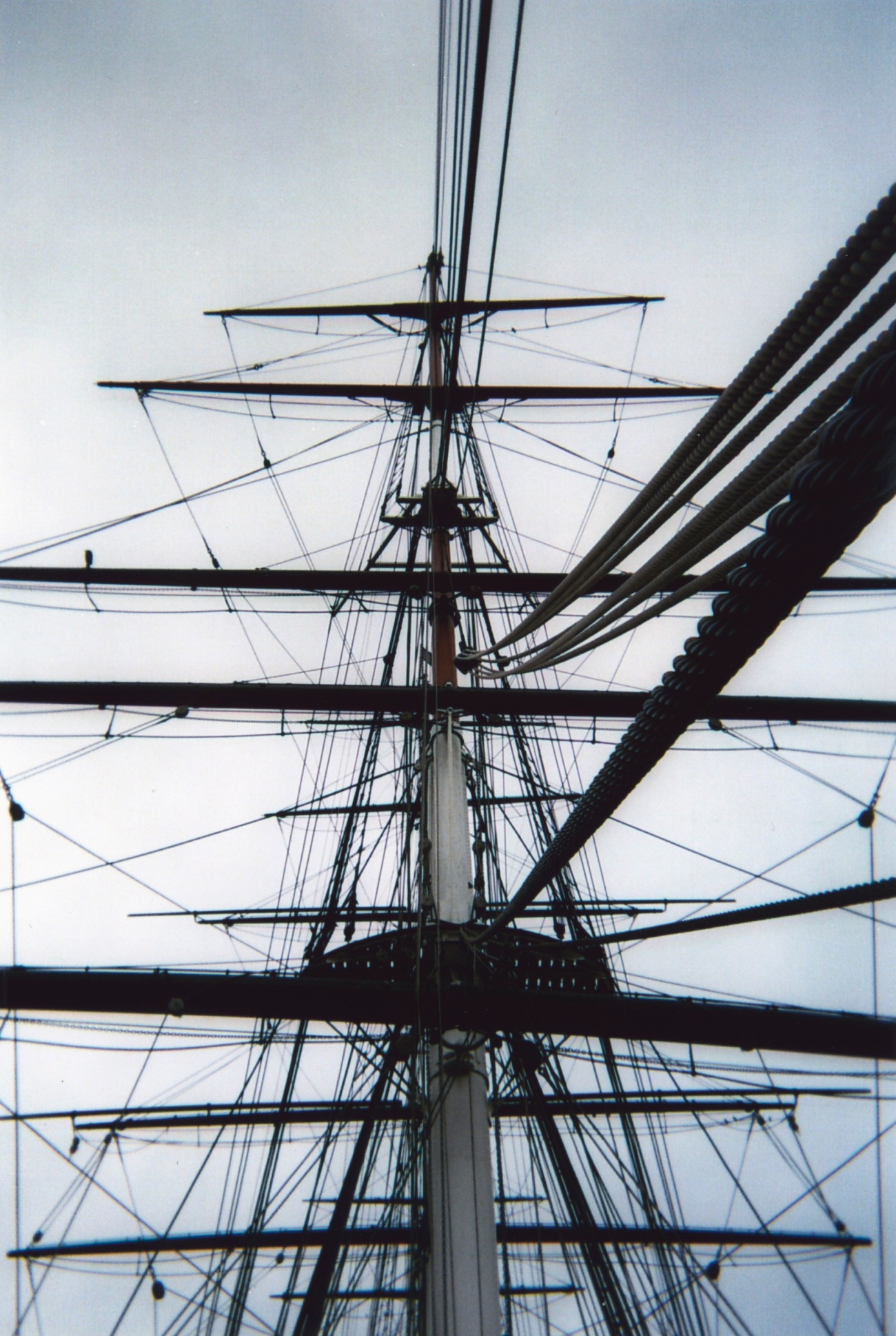 Clippers like the Cutty Sark were built for speed. Tea was a seasonal cargo, and the first shipment to make the long journey from China to London would fetch the highest prices, a healthy bonus for master and crew and bragging rights for the shipbuilders. These were the fastest ships of their time. Competition between the clippers was fierce and captured the imagination of the public, the ships often becoming household names and gamblers betting on who would arrive at the docks first. In 1872 one such race was particularly notable, with the Cutty Sark and her rival Thermopylae both leaving Shanghai on the same day, the Cutty Sark led through the South China Seas, but lost her rudder off South Africa and had to pull in for repairs. Despite a relatively quick pit stop, she was beaten by the Thermopylae. The Cutty Sark sailed eight ‘tea seasons’, from 1870 – 1877, but despite being one of the fastest ships she never quite made it back first. There were also other competitors on the horizon, the age of sail was waning as steam gained traction. Coal replaced wind. 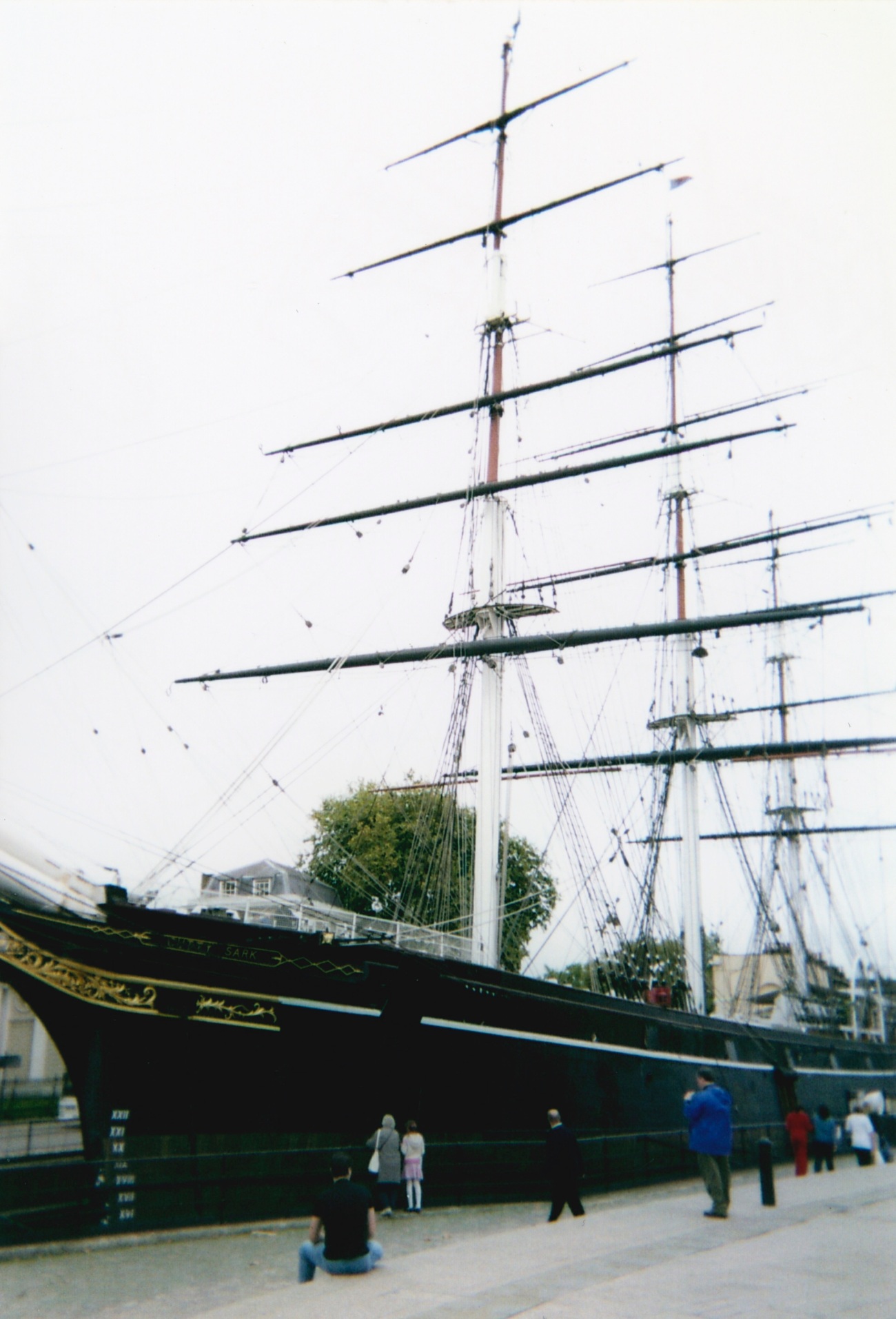 There are few original nineteenth-century tall ships still with us today and each one has a remarkable story, usually punctuated with a golden age, career changes, near misses and eventually the foresight of a person or community that rescued, cherished and restored them. In 1897 the Thermopylae was sold to the Portuguese Navy and renamed the Pedro Nunes. In 1907 she was used as torpedo practice in front of the Queen of Portugal. In 1922, the Cutty Sark was the last clipper still plying her trade, under a Portuguese flag and the name Ferreira (although her crew referred to her as Pequena Camisola, small shirt, a literal translation of cutty sark). A retired captain, Wilfred Dowman, saw her in Falmouth, Cornwall, and with the help of his wife Catharine bought her from her Portuguese owner. The old clipper was used as a cadet training ship and in 1953 was given to the Cutty Sark Preservation Society, and moved to a dry dock in Greenwich, where she continues to capture the imagination of the public. A rare survivor from one of the great chapters of maritime history. 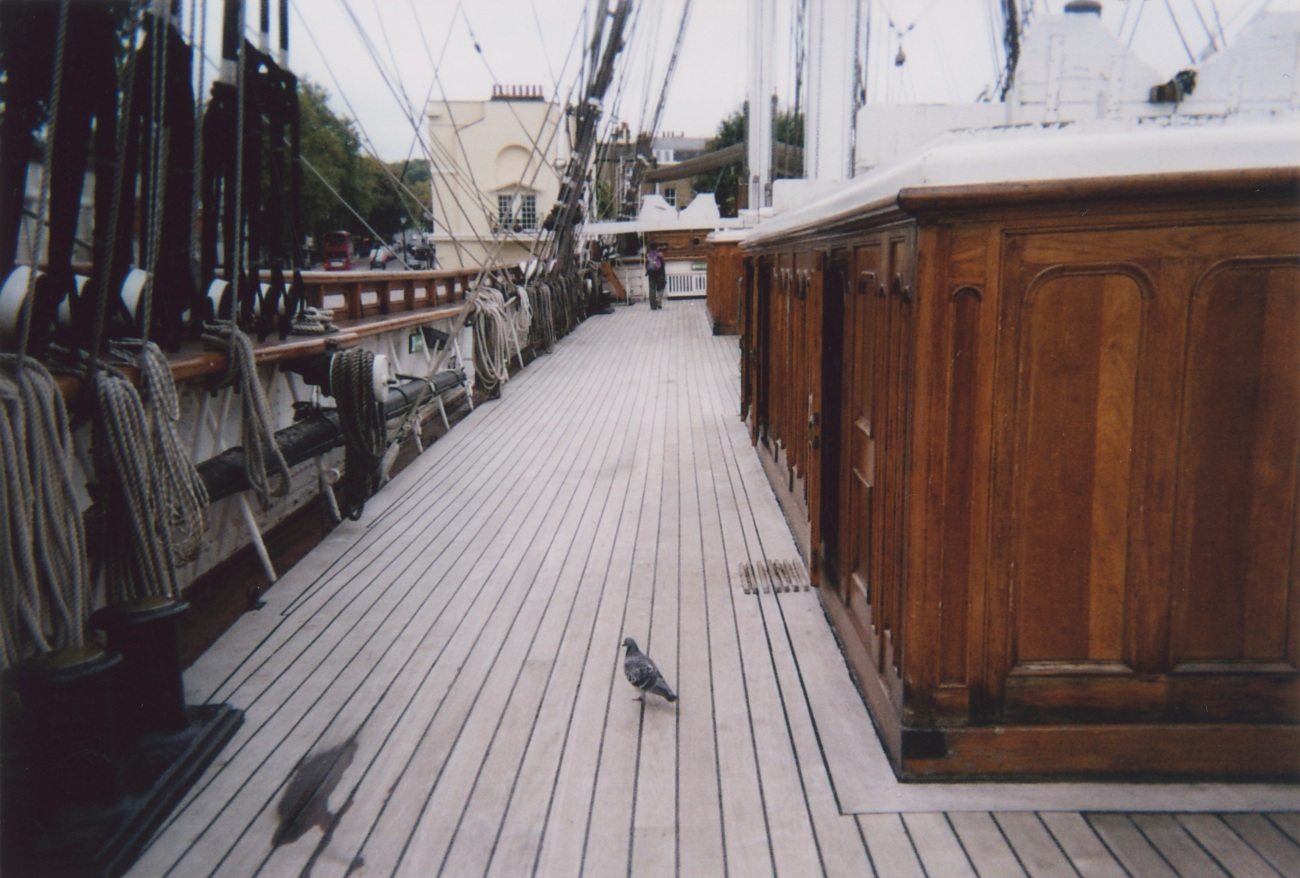 I grew up with a painting of the Cutty Sark on the wall of the family home – a print of Montague Dawson’s ‘Racing Home, The Cutty Sark‘. She was also the first tall ship that I ever stepped foot on. My first trip overseas was to London in 2005, to visit a film archive while working on a documentary series and on one of my weekends I made sure to go to Greenwich to visit the legendary ship. These photographs were taken during that trip. Two years later she was gutted by a fire, I remember being devastated when I read the news, but fortunately half of her timbers were undergoing conservation work offsite at the time of the blaze and the ship was able to be restored to her former glory. 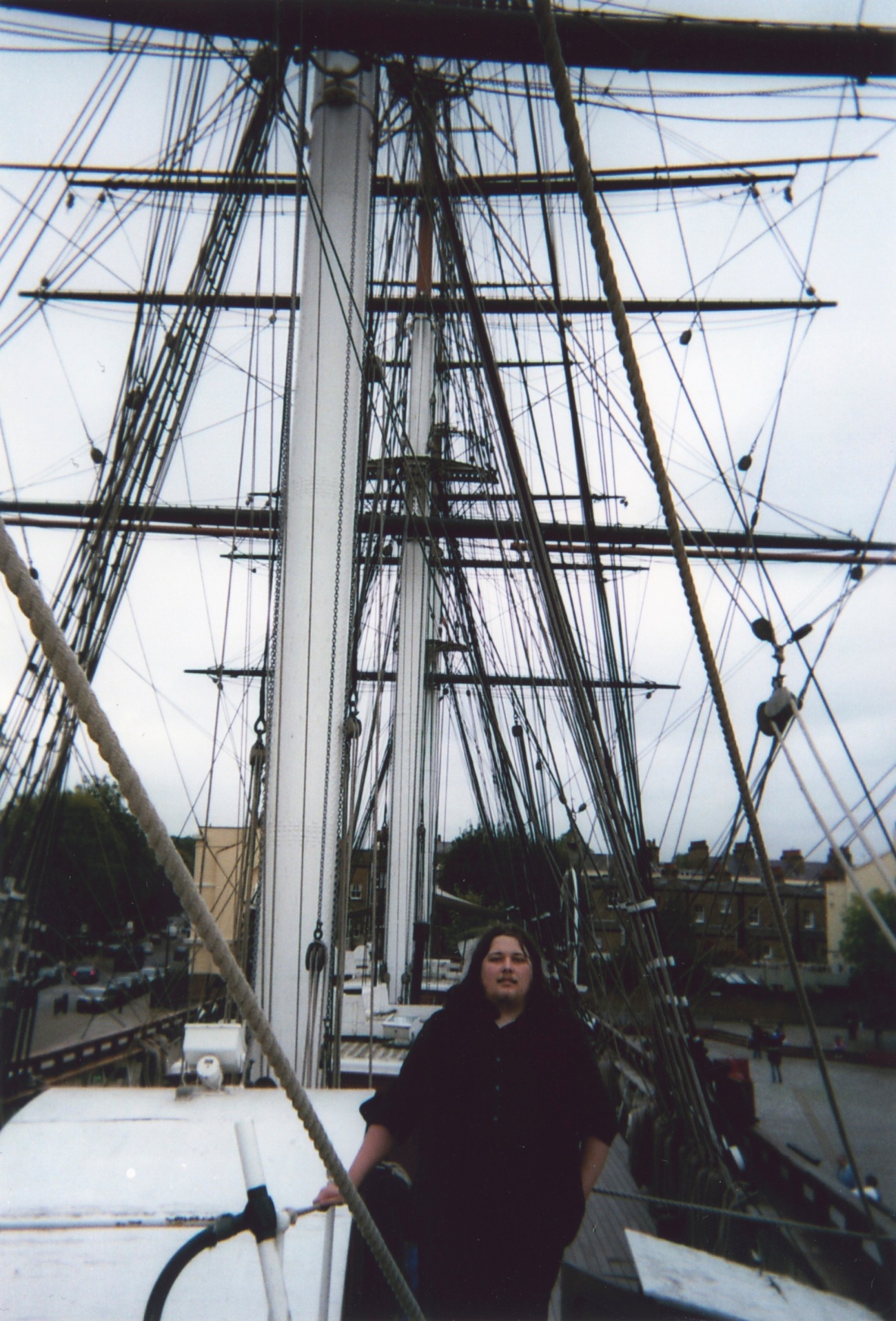 A young History Geek onboard the Cutty Sark, 2005.

Since that trip fourteen years ago I’ve been fortunate enough to visit at least one tall ship each time I’ve been overseas, including some in Australia, the United Kingdom and the United States, and also caught up with, stalked and sailed on a few here in New Zealand, but I’ll never forget that visit to the Cutty Sark and the magical moment when I got to step onboard a real superstar from the age of sail for the first time.

It’s worth mentioning that as environmentally-aware consumers look for ways to reduce their carbon footprint, some international exporters are looking for alternatives to oil-powered shipping and sail is starting to make a comeback! Just a couple of months ago the schooner De Gallant became the first tall ship to deliver goods to Bristol since the 1970s. Perhaps sometime in the future we might see the return of the tea clippers. One can dream. Make that happen and you might even convert me from coffee.

If you are in London this weekend then you can take part in the Cutty Sark‘s birthday celebrations, she is dressed overall in special signal flags from masthead to masthead, and there will be a classical concert and birthday cupcakes. Royal Museums Greenwich always have a lot of other events on so check out their calendar (John Tams of Sharpe fame performed onboard the Cutty Sark in October, how I would’ve loved to have been there for that!). If you do visit the legendary clipper then make sure to check out her figurehead – the witch Nannie Dee with her arm outstretched and clutching the tail of Tam’s unfortunate horse.

If, like me, you are on the wrong side of the world to take part in celebrations then maybe have a fresh cup of tea or a dram of whisky in her honour.