When my copy of Matthew Wright’s expanded and updated edition of ‘Living on Shaky Ground: The science and story behind New Zealand’s earthquakes’ arrived I was looking forward to learning about the latest advances in seismology; slow-slip earthquakes, the complex multi-fault Kaikōura quake and how seismic events previously presumed to be separate may actually be interconnected, but then something happened that gave this book a slightly different relevance. A virus started spreading overseas and things escalated rather quickly. This became my lockdown reading. 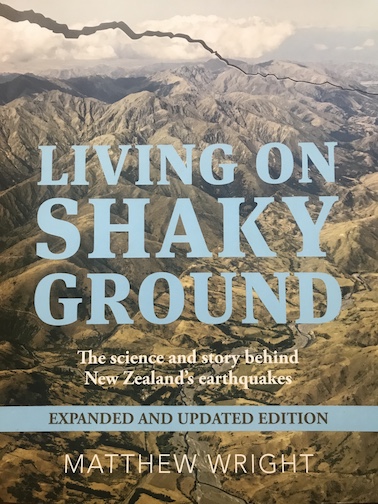 There have been a few mild shakes here in New Zealand in the last couple of months while we’ve been self-isolating, nothing to give anyone a real scare but enough for some to mutter “Don’t you bloody well dare!”, or “not now, Alpine Fault!”. One crisis at a time is more than enough! Nobody wants a pandemic and an earthquake, so reading this book felt a little like I was tempting fate.

I had previously enjoyed the first edition of ‘Living on Shaky Ground’, which was published in 2014. The strong grasp that Wright has of both science and history is evident, as is his strong personal connection to his home town of Napier – with particularly interesting insights into how veterans of the First World War responded to scenes of devastation there during the 1931 Hawke’s Bay earthquake that for many would’ve given flashbacks to their service on the Western Front – specifically of the destruction at Ypres. Some authors have a strong grasp of science, but ignore the history, or vice versa, but the way the two are inter-weaved in this book is excellent, with personal experiences and scientific explanations complimenting each other. I also commend the way that Wright’s account of these ‘shaky isles’ doesn’t begin with the arrival of the first Europeans but that the stories of earlier events are also included – including Haowhenua, ‘the land swallower / destroyer’, the mid-15th century earthquake so transformative that it converted the island of Motukairangi (Miramar) into a peninsula. Landing at Wellington airport can be hair-raising enough on a windy day, but it is even more sobering when you know that the land it was built on was created by a colossal earthquake. Knowledge of these past events and the impact they had on the terrain changes the way you see landscapes today.

Humans are pretty damn good at adapting to change and responding to even the most trying of circumstances, but we aren’t always the best at preparing for threats that we haven’t had personal experience with before – even when we have the benefit of the memories of previous generations and the work of scientists to draw upon. Our perspective on the risks of global pandemics have recently been given a dramatic shake up, but in the last decade we’ve also seen a sizeable shift in attitudes towards the dangers of earthquakes here in New Zealand – which Wright addresses:

“To the youth generation of the 1980’s ‘yuppie’ era, often unaware of the science emerging at the same time, earthquakes were a quick rattle and shake; a moment of excitement that was soon over with nothing more, perhaps, than a few ripples in their chocolate latte to show for it… The perception was generational, coming on the back of the fact that there had been no large quakes for some time. Edgecumbe, in 1987, was an exception.”

The series of large earthquakes in the last ten years were a wake-up call to many New Zealanders of the seismic risks beneath our feet, risks that had consistently been there but had been pushed slightly further to the back of the minds with each generation. The “shaky isles” as a moniker was almost lost to time, a quaint nickname that European settlers once used, and in many minds the 1931 Napier earthquake had become scarcely more than black and white photographs in school journals or a quirky fact followed by something about Art Deco, an event scarcely remaining in living memory. It came as a further shock for some when it was Christchurch that was hit, and not Wellington, the one place where the ‘big one’ was expected – in a yeah, nah, not really, whatever, kind of way. 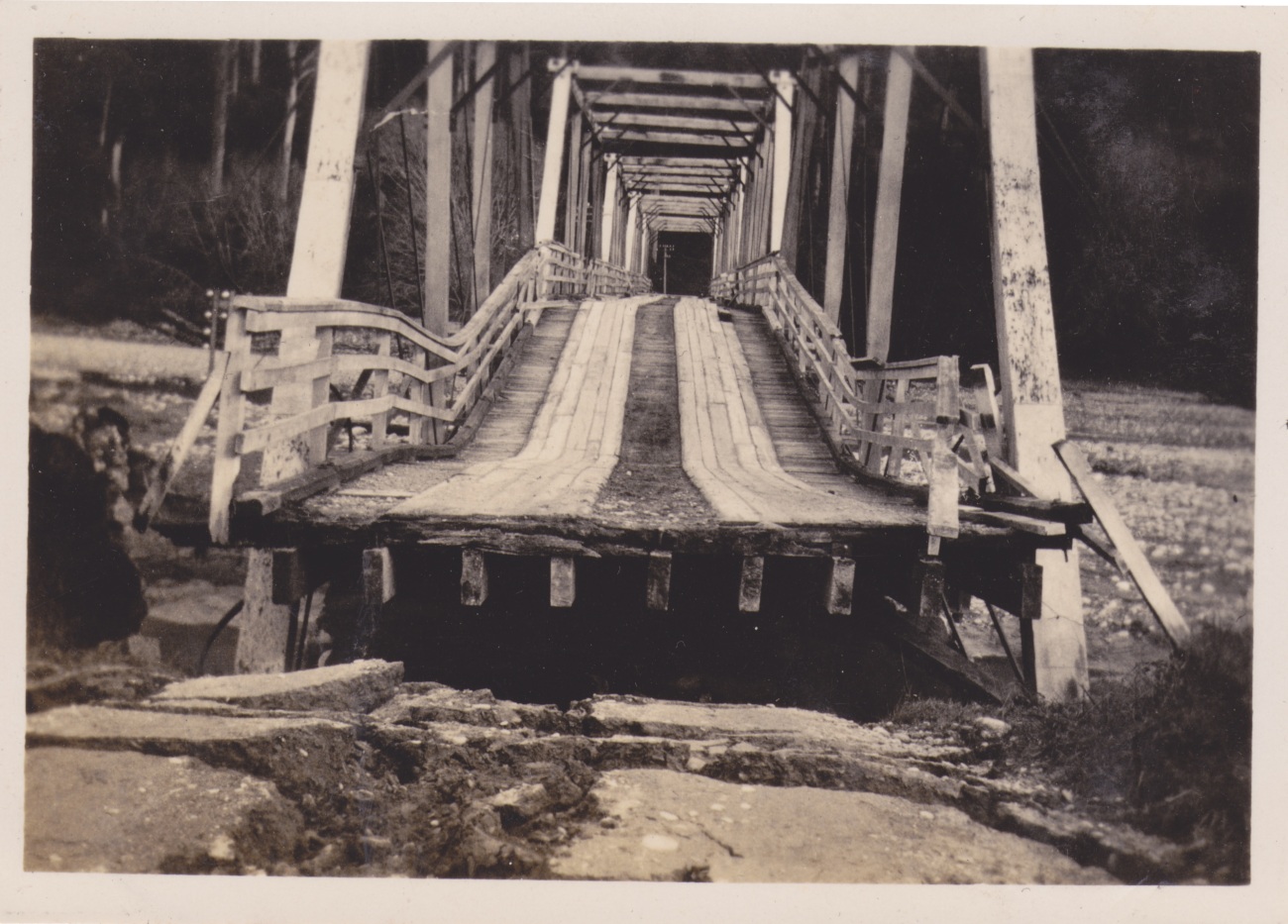 Aftermath of the 1929 Murchison earthquake. One of several historical images from my personal collection that feature in this book. Lemuel Lyes Collection.

Likewise if we had listened to the warnings from history and paid more attention to epidemiologists,  then perhaps we would’ve been a little better prepared to face the threat of a global pandemic. Yes, it is unparalleled event in our lifetimes, but it shouldn’t have come as a surprise. Just eighteen months ago here in New Zealand we marked the centenary of the peak of the 1918 influenza, but the anniversary passed with little attention compared to what was given to the centenary of the First World War. There have been plenty of warnings from scientists too. Pandemics and international air travel were always going to be a bad combo.

We should do what we can to learn from the lessons from history; by listening to the historians and scientists, and sharing the work of science communicators who distill the work of experts into ways that everyone can understand. Here in New Zealand we are lucky to have some talented trailblazers in that space, most recently the work of Siouxsie Wiles and cartoonist Toby Morris has, for lack of a better term, gone viral.

So what seismic warnings are in Wright’s updated edition? The usual boogeymen are still there, the Alpine Fault for starters, which triggers roughly every three hundred years and its last major movement was in 1717 (oh dear, just over three hundred years ago) – an event that Wright covers in detail. Then off the east coast of the North Island there is the Hikurangi Trench which has the potential to produce an earthquake and tsunami on a similar scale to that experienced by Japan in 2011. Wright highlights historical examples of tsunami in New Zealand and the impact they had on Māori communities. The risk of a similar event today is made obvious.

Another immediate area of concern is how large earthquakes in New Zealand appear to cluster in what Wright describes as “large multi-decade cycles”. There was a large cluster of devastating quakes in the 1840s – 50s, then comparative quiet until another series of shakes in the 1920s – 40s, then again comparative quiet until the last decade. Is the current phase over, or are we only part way through a cluster of large quakes?

“The patterns of deeper history reveal the greatest dangers we face, because they shed light on when – and where – such events might happen again. These studies of the past, in short, are not about dead history, but about revealing our future.”

It’s important to be prepared – to keep that emergency kit stocked (use all that canned food and toilet paper you recently bought as a starting point, but make sure you have plenty of fresh water and prepare for power cuts too), have a disaster plan and don’t wait to self-evacuate away from coastal areas after a major shake.

The other thing that really struck me when reading this book was the stories of how communities rallied together during difficult times, looked out for each other and helped to rebuild together. We can take a lot of inspiration from that as we face our own challenges today. While this is a book about the land and the forces beneath it, it is also about people – the way we evaluate the risk of natural disasters and the way we respond to them when they happen. That’s something that’s as relevant now as ever.

You can buy ‘Living on Shaky Ground: The Science and Story Behind New Zealand’s Earthquakes Expanded and Updated Edition: 2019’ online, or go out and support your favourite local bookshop now that they have opened their doors again.