Tempests, waterspouts, thunderstorms and hurricanes have throughout the centuries struck fear into the hearts of many a brave sailor.  The image of a tall ship battling against the relentless elements will be familiar to fans of maritime historical fiction such as works by Patrick O’Brian and C.S. Forester.  […]

I started this post as an innocent attempt to share a beautiful vintage postcard of Wellington but somehow ended up giving myself a crash course on the introduction of electric street lighting to New Zealand cities.  It is a subject that proved to be rather illuminating…  First, here […] 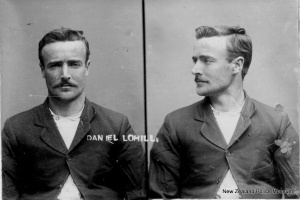 The Truth Behind New Zealand’s Most Photogenic Criminal

I have some good news!  I’ve been awarded the ‘Liebster Award’ by Matthew Wright.  He runs a fantastic blog on writing techniques, the publishing industry, science fiction and all sorts of insightful musings – dare I say it laced with an appropriate dose of geekiness.  It is quite […]

Today marks eleven years since the terrorist attacks that changed the world.  I’m not going to dwell on the facts, or repeat the stories that we have all heard before, but I do want to share one perspective on the event. My day job involves sourcing archival footage […]

What is Postal History?

It is time to introduce another one of my collections to you, the one which is more responsible than any other for introducing me to the exciting world of ephemera.  That is probably a sentence that you haven’t seen before.  Here is another one.  Postmarks can open portals […]

What to do if New Zealand is Invaded

A while ago I shared some advice on how to survive an air raid and another post on what dangers you should watch out for in the aftermath.  I’m pleased to let you all know that so far none of my readers have had the opportunity to use […]

This afternoon I jumped at the chance to view the 1926 silent black and white film ‘Mantrap‘ at the Regent Theatre in Dunedin, screening as part of the International Film Festival.  It is a rare experience to attend a silent film with live piano accompaniment, something that must […]

Collecting can be very rewarding.  It has the thrill of the chase, offers genuine investment opportunities and can open personal windows into different times and places.  So with the Olympics currently underway I thought that perhaps this might be an opportunity to lure a few readers into the […]