Apologies for the delay since my last post, in part due to my attempting to juggle my day job with screenings at the International Film Festival and of course soak in as much of the Olympic atmosphere as is possible when in the completely opposite time zone.  But I am back and have an Olympic themed history treat for you.

Out of sheer curiosity I decided to take a look back at the 1912 Stockholm Olympics to see how much has changed in the last century of competition.  There were so many ridiculous, abstract and bizarre footnotes that I couldn’t help but share some. 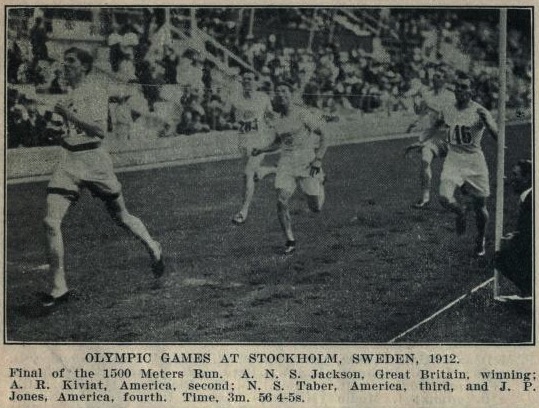 1:  Tug of War was an official event.  You can see a very cool film of the 1912 competition here.

2:  Wrestling matches could last over 11 hours.  During which you could break for refreshments.

3:  If you didn’t get selected by your country you could sign up privately like this guy.  (This was the last Olympics where you could do this although some of you may have noticed in the Opening Ceremony last weekend there were a handful of “Independent Olympic Participants”).

4:  It was also the last Olympic games when the gold medals were pure gold.  The gold medals awarded today are actually made of silver with a gold gilding.  This seems to have gone unnoticed by athletes, despite the number of them that bite their gold medal to test them.

5:  There were Olympic medals handed out for Art Competitions including sculpture, painting, architecture, literature and music.

6:  One of the races took over half a century to complete. A Japanese competitor achieved an unbeaten record for the longest time to complete a marathon.  It took him a total of 54 years, 8 months, 6 days, 8 hours, 32 minutes and 20.3 seconds.  I’m not kidding. Shizo Kanakuri collapsed along the way, stopped at a garden party for a drink and then decided to make his way back to Japan without telling anyone.  He was invited back to Sweden to complete the marathon in 1967.

7:  Aussies and Kiwis were on the same team.  In both 1908 and 1912 a joint Australasian team competed at the Olympics.  It was here in 1912 that Malcolm Champion became the first New Zealander (although he was born on Norfolk Island) to win a gold medal at the Olympics when the Australasian swimming team won the 4 x 200m freestyle relay.

8:  Finally, news of athletes success arrived via telegram instead of twitter.  Telegrams are much more awesome.

I hope you lot are all enjoying the Olympics and a big congrats to the South Island boys who scooped up a gold medal this evening in the rowing… well a silver medal with a gold coating.