Guy Fawkes Day is among New Zealand’s most bizarre commemorations.  For my international readers, here it is the only time of year when anyone of a “responsible” age can buy and let off fireworks.  The reason for such merriment – to commemorate this foiled plot to blow up the House of Lords.  In England.  Four centuries ago.

While the original reason behind the commemoration might not be relevant to twenty-first century New Zealanders it is undeniable that Guy Fawkes Night has managed to persist and in its own way has become part of our culture.  The sounds of fireworks in early November conjures up nostalgic memories for many.  We fondly remember bonfires (now need a permit), sky-rockets (now banned), Tom Thumb crackers (also banned), roman candles (which you aren’t supposed to hold) and writing your name in the air with sparklers (still allowed, but be careful).  It isn’t the meaning of the holiday that persists, but the excitement of having the opportunity to make things go bang.

Out of curiosity I thought I might rewind the clock and see what a Kiwi Guy Fawkes commemoration might have been like 100 years ago.  Thanks to Papers Past I found the following extract from the Evening Post, Volume LXXXIV, Issue 110, 5 November 1912.

From the feeble efforts shown by some Wellington children to-day the art of “Guy construction” is in a very low state.  A bundle of clothes, a hat, and a penny mask did the trick. While there was no ingenuity shown in the average effigy, there was plenty of assurance on the part of the boys (and girls) in collecting money for fireworks. The weary citizen in his beauty-sleep who was awakened by shouts of Guy Fawkes, Guy!” at from 4.30 to 5 in the morning was probably in no mood to fling largesse among his disturbers- The children were persistent, however, going from house to house in their own localities. Public enthusiasm in the Fifth of November does not extend much beyond the purchase of a few fireworks (mostly Chinese) for the children. No doubt the excuse to have bonfires tonight will be taken advantage of, especially on the Town Belt, but the Fifth of November as such is a day that has long since lost its significance.

As described by the above writer, a key part of any Guy Fawkes celebration in 1912 was the construction of an effigy to be burned on the bonfire.  This task was usually performed by children who would then cart their “Guy” around their neighborhood and ask for donations for fireworks.  “Can I have a Penny for the Guy”. 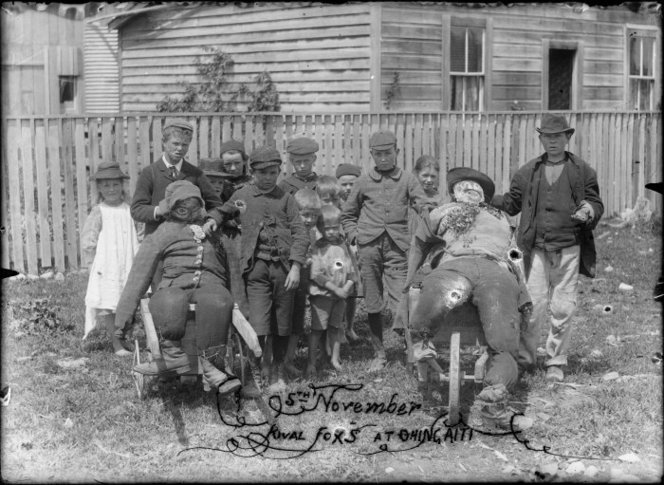 This fantastic photograph of Kiwi children with their “Guys” was taken about 110 years ago and would be fairly representative of scenes up and down the country every 5th November.

While trick or treating may be a new tradition it is ironic that a century ago there would’ve been children wheeling around an effigy and pestering their neighbours for funds, all for the purpose of holding a symbolic public execution.  On face value it was arguably as morbid as the most gruesome of Halloween traditions, and probably just as much fun.

After cashing in their donations for fireworks the children would wheel their “Guy” to its place of execution – a well stacked bonfire.  It was the night-time celebration that was the most anticipated.  The Thames Star from November 6th 1912 reports…

Guy Fawkes was celebrated with good deal of gusto by the younger generation last night.  Bonfires were light on advantageous positions on the hills, and numbers of excited children could be seen dancing round the fires enjoying themselves to the full.  In some instances the scrub caught fire and result was an illumination which could not possibly have been secured by the handiwork of the young ones.  This morning an unusual number of blackened hands and bandaged fingers was an indisputable indication that Guy Fawkes was more than merely celebrated by Thames juveniles.  The injuries received in no way detracted from the pleasures of the evening, in fact they added to them.

So it seems that one hundred years ago authorities had to deal with some of the same problems they face today, injuries, fires and sadly a fatality in Gisborne when a man was thrown from his horse after it bolted due to the sound of fireworks.

But despite the dangers Guy Fawkes commemorations have continued for another century.  Call me reckless but sometimes a hint of danger can be exciting.  I’m guessing that is why men, women and children from a small town in Devon run around with flaming tar barrels on their shoulders every 5th November.

Traditions can be a good thing and we shouldn’t question every holiday just because the meaning now seems irrelevant.  For example, just a fortnight ago a friend of mine was complaining about having to work 15 hours on Labour Day (A holiday to celebrate the struggle for an 8 hour working day).

Happy Guy Fawkes, I’m off for a walk to enjoy the one night of the year that suburbia smells and sounds like a war zone.