Today marks one hundred and fifty years since the first skirmishes of the Waikato Invasion were fought.  I’m not an expert on the subject but it feels wrong to not acknowledge such an important date in New Zealand’s history.  It isn’t about celebrating; it is about commemorating and remembering.

The Waikato Invasion was the largest campaign of the New Zealand Wars.  Governor Sir George Grey had decided that the Kingitanga Movement was too great a threat to British authority and that the most appropriate answer to that threat was shot, shell and steel – none of which were particularly diplomatic.

I don’t want to dwell too much on the politics and reasons behind the wars, not because they aren’t important but because they are complicated and there are others better qualified to explain them than I am.  Instead I’m going to focus on what happened when and where, and most importantly what it must have been like for the individuals caught up in the whole mess.

On 12th July 1863 British soldiers crossed the Mangatāwhiri River, which was considered the northern boundary of the Waikato, and from that point on armed confrontation was all but inevitable.  The first skirmishes of the campaign were fought exactly one hundred and fifty years ago. 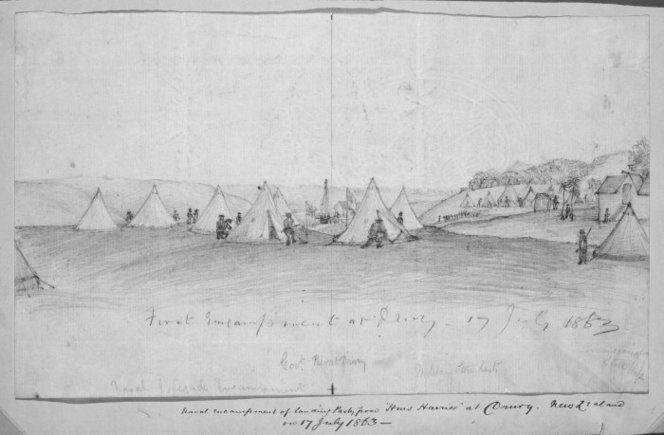 In this opening stage of the campaign both sides were eager to test their mettle against the other.  There were two key actions on 17th July – one ended with a bayonet charge by British forces and the other was a guerrilla style strike by Māori.  There would be no more diplomacy – the fire was in the fern.

Koheroa:  Battle for the Waikato Heights

After crossing the Mangatāwhiri the British advanced towards the strategic high ground overlooking the Waikato River; but an advance force of Māori warriors led by Te Huirama had already taken up position in the heights, and under the watchful eye of the14th Regiment were seen to be digging defensive rifle pits.

The 14th Regiment advanced uphill towards the Māori positions, joined by men from the 12th and 70th Regiments.  The first casualties were British, picked off as they advanced through the fern and Manuka.  The men waivered initially but were bolstered by General Cameron who led them on a bayonet charge – driving the defenders from their positions.  He was nominated for a Victoria Cross for this action but the request was turned down, with his superiors noting “a commanding general had no business risking his own life”. 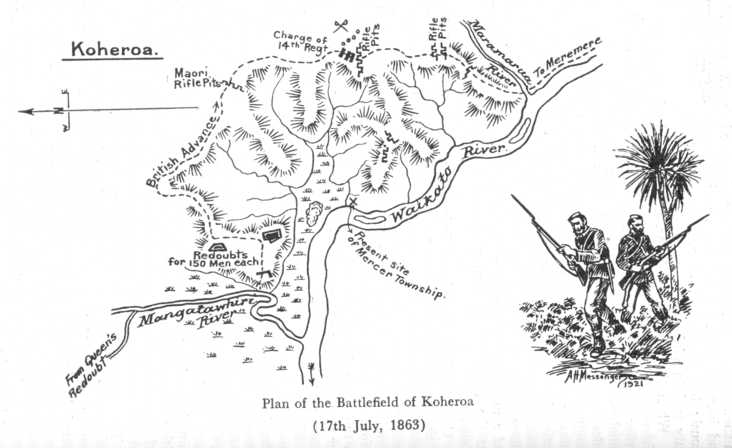 After the battle General Cameron gave a short speech to his men, “You see, men, the only way to do with these fellows is to rush them at once”.  It was a morale-boosting and strategic victory for the British at Koheroa, but what those cheering men didn’t know was that there had also been another skirmish that same day.

The British had numerical and technological superiority over their adversary but the Māori forces were quick to identify the importance of the British supply lines.  While the British soldiers at the front were celebrating their victory at Koheroa, behind the lines they were recovering from a deadly ambush.

The Great South Road was the main artery for General Cameron’s military machine – it kept his forces connected to supplies and re-enforcements.  Without this vital lifeline the British war effort would grind to a halt.  I wonder how many Auckland commuters realise the historical significance of that road as they drive to work each day.  As frustrating as their commute might be, at least they don’t have to worry about being ambushed.  The same can’t be said for British soldiers during the Waikato campaign.

On 17th July 1863 fifty soldiers from the 18th Royal Irish Regiment were escorting a convoy of six carts along the Great South Road near Ramarama when they came under attack from Māori warriors who had concealed themselves in the thick bush on both sides of the road.  Several soldiers were killed in the first volley as the horses reared among the confusion.  The ambushers then rushed the rear guard, trying to cut them off from the main body – the outnumbered soldiers counter-charged with the bayonet and fought their way through.  The Māori continued to harass the escort until reinforcements came to their rescue.  Five soldiers were killed in the ambush and 11 were wounded, while Māori losses were minimal. 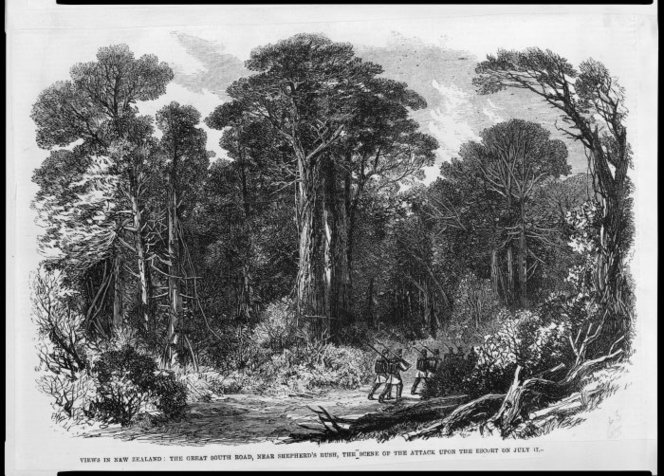 The description published in the Daily Southern Cross the next day is truly horrific:

“One poor fellow had his face frightfully tomahawked, and his tongue was nearly plucked up by the roots.  It was, in truth, a ghastly sight.  Stiff and cold, they lay bathed in blood, – some stripped of their shoes; and the man I have mentioned presenting a more fearful spectacle than it often falls to the lot of one to witness.  The tomahawk broke in the bones of his face across the left eye and on to the temple, exposing the brain; and the swollen tongue lolled out of his mouth”.

I should point out that you kind of have to take newspaper reports of the conflict with a large pinch of salt.  Relying on them as your only primary resource would be a bit like relying purely on Fox News to give a fair and balanced view of the Iraq War.  There is no doubt some truth in the newspaper accounts – but with side servings of embellishment, patriotism and colonial propaganda.

And so that miserable winter day one hundred and fifty years ago ended with casualties on both sides, the Māori retreated from Koheroa while the British reeled in the rear with a newly found distrust of roadside shrubberies.  Meanwhile the Auckland public were starting to work themselves into a panic as rumours of the fighting began to reach them, and down south in Otago – well prospectors were still busy finding gold and drinking whisky.  However as I mentioned in my last post it wasn’t to be the most comfortable of winters for them either.