Right now the South Island is in a state of panic with news of the approaching snow storm.  The Red Cross is on standby, warnings are bombarding the masses from every conceivable angle and supermarkets are running low on bread, milk and romcom DVD box sets as people prepare for the impending ‘disaster’.

I know that it is a good idea to be prepared but it is almost laughable how a little bit of precipitation can send a supposedly technologically advanced society like ours into such a panic.  We really should thank our lucky stars that we have decent housing, electric heating and puffer jackets to keep us warm.  The diggers of the Otago gold rush had none of these things and 150 years ago they had to fend for themselves during one of New Zealand’s harshest and deadliest winters – which I’ve decided to call Snowpocalypse 1863.

History may be my main area of interest but I’m also a bit of a weather geek, and of course the two often intertwine.  One of my first television projects involved spending months searching through TVNZ’s archive looking for the coolest weather related footage.  A highlight was the montage we put together of cars sliding and crashing on icy roads in Dunedin’s hilly suburbs.  The news crews are a cunning lot, they know which intersections are the worst and they make a beeline to the same streets every winter to catch the inevitable carnage on camera!

While working on that series I was privileged to speak with a lot of people who have dedicated their lives to meteorology and they helped give me a crash course on New Zealand’s most extreme weather.  When it came to snow there were two standout events.  The most often cited is the snow of 1939.  It is well documented in photographs, film and print; and there is every chance that someone in your family might be able to remember it (hint – ask them).  Otago was hit pretty badly with parts of Dunedin buried in over a metre of snow.  It was a pretty impressive snowpocalypse but it wasn’t our worst – that dubious honour goes to a winter in the previous century.  The great snow of 1863. 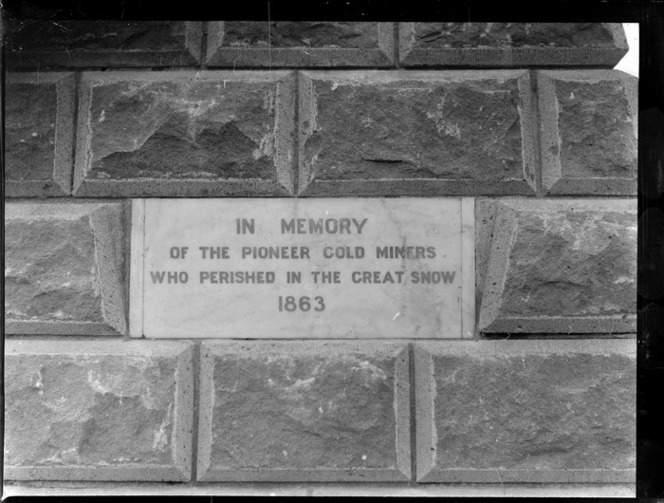 One hundred and fifty years ago New Zealand was in the midst of a rather dramatic year.  It was a dark time in the north – the Orpheus sank in February and ominous clouds were gathering over the Waikato as the Queen’s men prepared to invade the King Country in what would become the biggest campaign of the New Zealand Wars.

Things seemed more upbeat in the south.  The Central Otago gold rush was in full swing, the whiskey was flowing, the dancing-girls were dancing and the gold-filled purses were jingling (much to the delight of the bushrangers).  It was a prosperous and exciting time to be in the south, but bad weather was on the way for the miners in the frontier settlements.  They were in isolated valleys, often next to rivers and with little more than canvas for shelter.  It was the absolute worst timing for a harsh winter but that is exactly what happened.

It started in July 1863 when heavy snow storms were shortly followed by extreme rainfall, causing the snow to quickly thaw out and rivers to rise rapidly.  Rivers like the Arrow, the Shotover and the Molyneux.  Many miners were swept to their deaths while others watched helplessly as their few possessions were washed away.

August brought even more severe snowfall across the Otago goldfields.  Conditions for the miners became unbearable, roads impassable and many settlements became completely cut off from civilisation.  These conditions persisted until late September when the snow melted to reveal the fate of the unfortunate.  Estimates put the death toll as high as 100 – 200, but as the population of diggers was so transient we will never be sure of the exact number who lost their lives.

I can only imagine what it must have been like for those unfortunate prospectors stuck in a blizzard during that winter.  I’m not aware of any photos from the great snow of 1863 but these images from forty years later give an idea of what a severe snowfall in the old gold-rush towns may have looked like. 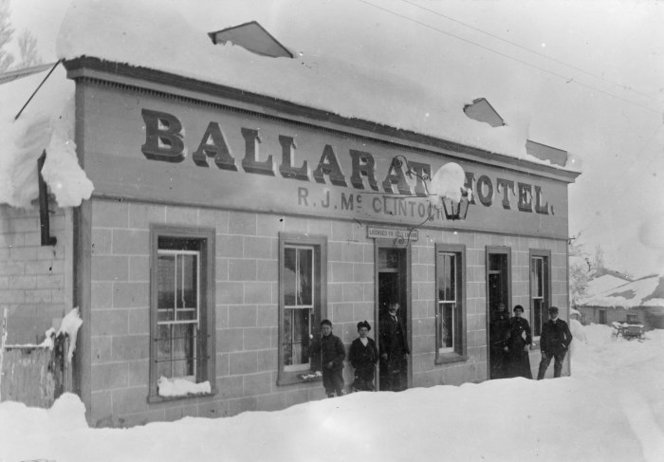 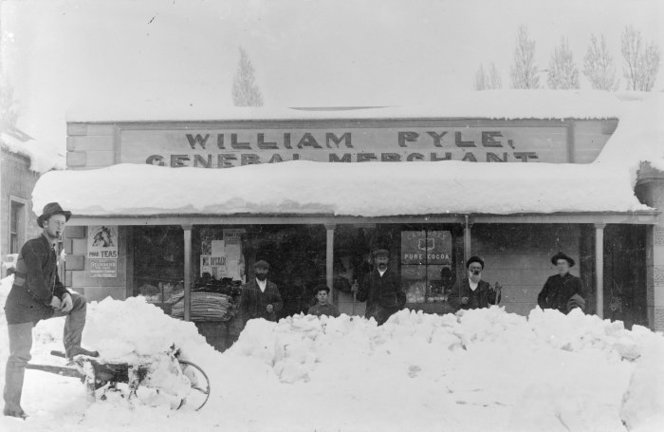 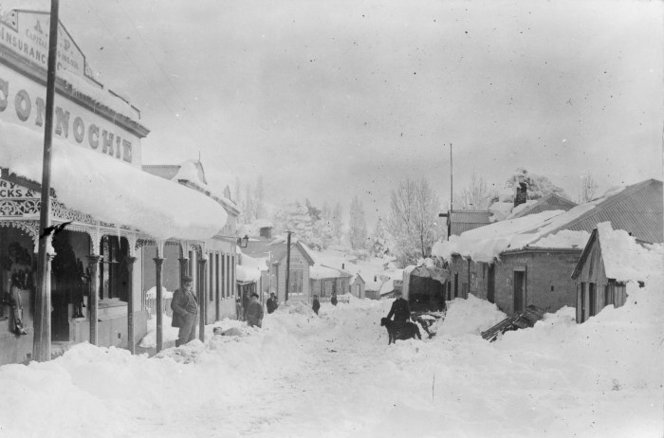 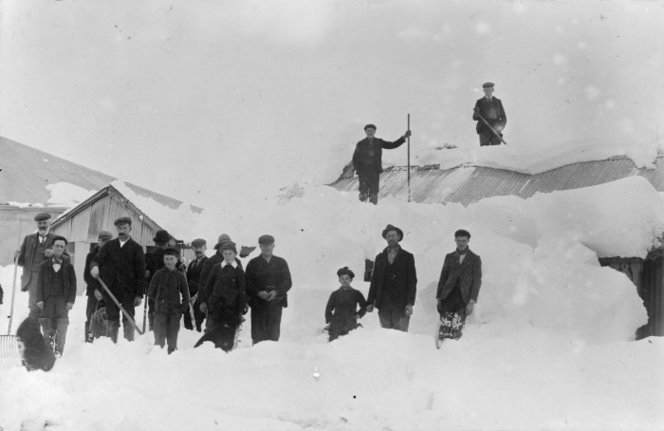 Now imagine that, but with less buildings, more tents and more impressive beards.

This description by an old digger called John Mouat isn’t from 1863 but it does give a good insight into what it was like to live through a cold Otago winter during the height of the gold rush:

“As winter set in the weather got very cold. Tent life was miserable. No fuel for warmth, only for cooking; and when the billy was boiled the sticks had to be put out and saved. Snow fell and lay on the ground, and the temperature went down to Arctic coldness.  About the beginning of July a heavy fall of snow took place which lay until the second week of August. The cold was intense. Boots and clothes were frozen like boards in the night-time, and had to be taken under the blankets and thawed before being put on in the morning. We had excavated places for our tents–cuttings in the hill-sides. This secured them from being blown away, but did not mitigate the cold.

The sides of the cuttings froze, and when a thaw came the water flowed in and froze on the floor. Work or bed were the only alternatives.  Saturday evening would occasionally be passed in a public-house, cowering over the miserable shadow of warmth diffused by a stove fuelled with bad lignite, emitting a most disagreeable sulphurous stench.”

Thankfully I suspect that most of us will survive the impending snowpocalypse, but spare a thought for those who endured the blizzards and floods 150 years ago.