A unique New Zealand story is hitting the big screen this weekend – Caroline Fitzgerald’s film ‘The Drowning Country’ tells the amazing story of how her great-grandmother revolutionised life jacket designs in the wake of the sinking of the Titanic.

Orpheus Beaumont always had a close connection with shipwrecks.  She was named after a brother who was presumed drowned during New Zealand’s worst shipwreck, the sinking of the HMS Orpheus in 1863.  Her brother was in fact safe, but tragedies at sea would continue to haunt Orpheus.

In 1912 her other brother drowned in a mishap off the Dunedin coast, and that same year on the other side of the world over 1500 people drowned in the most well known of all maritime tragedies – the sinking of the Titanic.  In the wake of this disaster the public were asked to submit ideas for improving existing cork life jackets.  Orpheus trumped all other suggestions with her design – the Salvus Kapok life jacket. 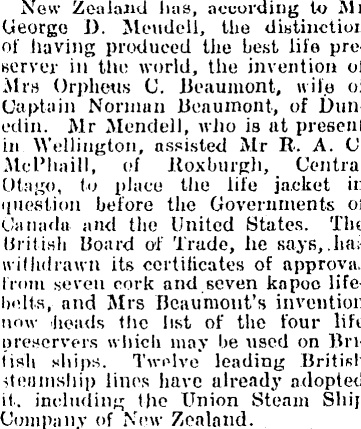 The story of Orpheus and her life jacket design is one of those incredible series of events that proves that truth can so often be stranger than fiction.  It is remarkable that an Otago woman named after New Zealand’s worst shipwreck played such a critical role in international maritime safety, and even more remarkable that the story has remained all but unknown until now.

Additional to sharing this incredible family story ‘The Drowning Country’ also charts the evolution of the life jacket through 150 years of New Zealand’s maritime history.  Caroline is a follower of this blog and I’m thrilled that in the lead up to tomorrow’s premiere her film has recently had some fantastic publicity, including coverage in the Otago Daily Times and on TV One’s Seven Sharp.

The film will be screening tomorrow October 25th at the Regent Theatre in Dunedin as part of the lineup at the Science Communication Film Premiere.  Those up in Auckland can view screenings this weekend in The Cloud during the Tall Ship Festival.  Follow the film’s page on Facebook for future screening dates.