Today marks the 70th anniversary of the D-Day landings. Last year I shared some of my experiences exploring Omaha Beach, to mark the anniversary this year I thought I’d share some of my photos from a D-Day commemoration I attended in Portsmouth five years ago.

I was actually in Portsmouth on another historical pilgrimage of sorts; one involving a rather famous ship that once sailed into a rather famous battle with a rather famous naval commander on her quarterdeck. Portsmouth has undeniably strong connections to the history of the British navy going back centuries, but it also played a critical role in the D-Day invasion. It was here that British forces assembled before departing for Sword Beach in Normandy. There is a museum in Portsmouth dedicated to the D-Day landings and it is a central point for British commemorations of the invasion. As luck would have it I was there for the 65th anniversary.

There was a strong turn out of Second World War military vehicles. My favourite display was this mobile canteen.

I had met a couple of off duty policemen on the train down from London who were on their way over to the commemorations in Normandy, where they were joining friends who owned a vintage military vehicle. They were friendly chaps who shared a couple of beers they had brought with them and chatted about their upcoming trip. The D-Day anniversary is a big day in the calendar of military vehicle enthusiasts, many of whom also dress up in historical uniforms and fall in alongside other reenactors. The historical re-enacting community attracts people for all sorts of reasons, I had dabbled in it myself when I was a teenager and some of the most dedicated reenactors that I met were those who had spent small fortunes making sure that their vintage jeep had all the historically correct accessories – to the point where it was inappropriate to not dress the part to complete the display. 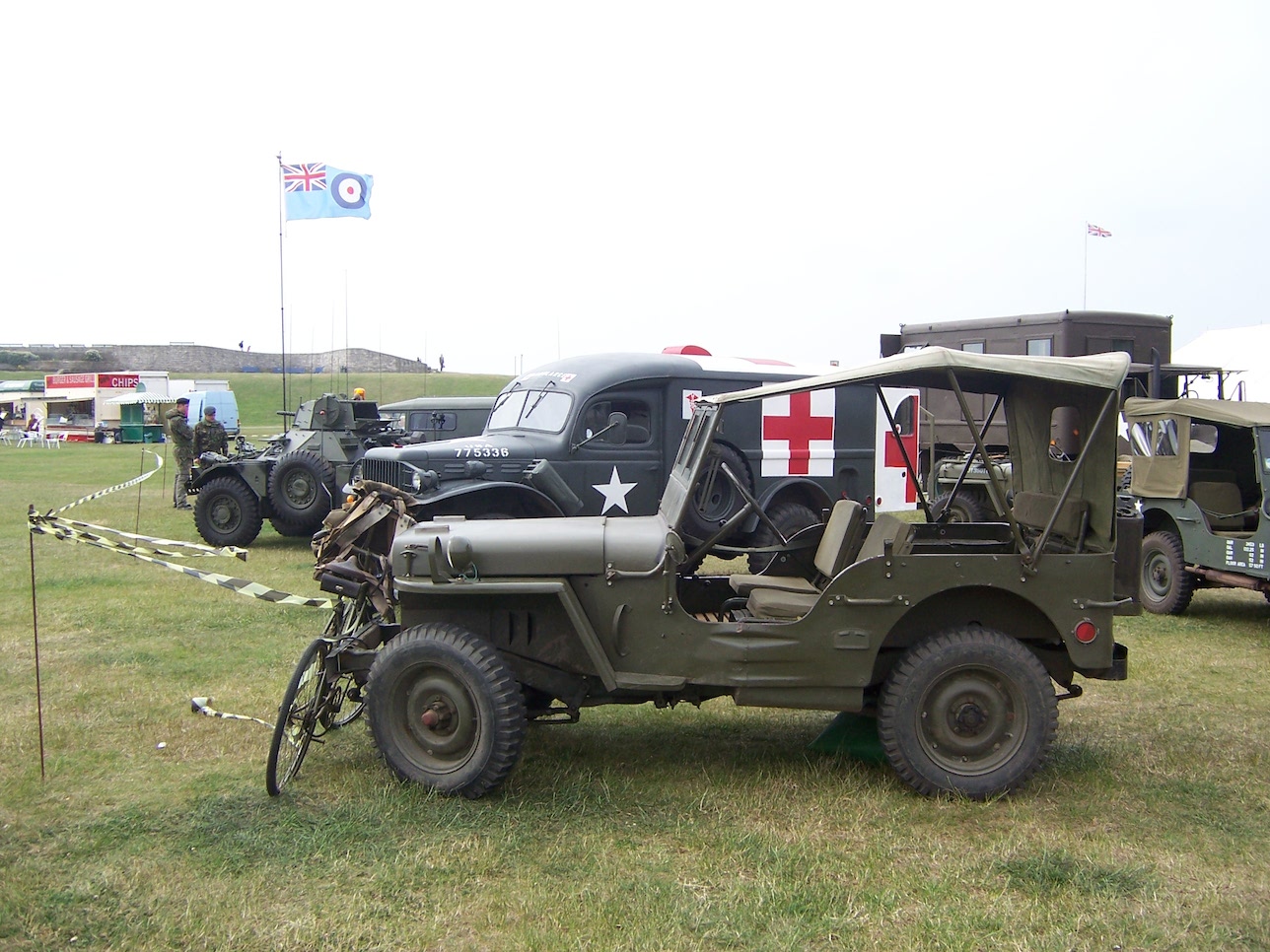 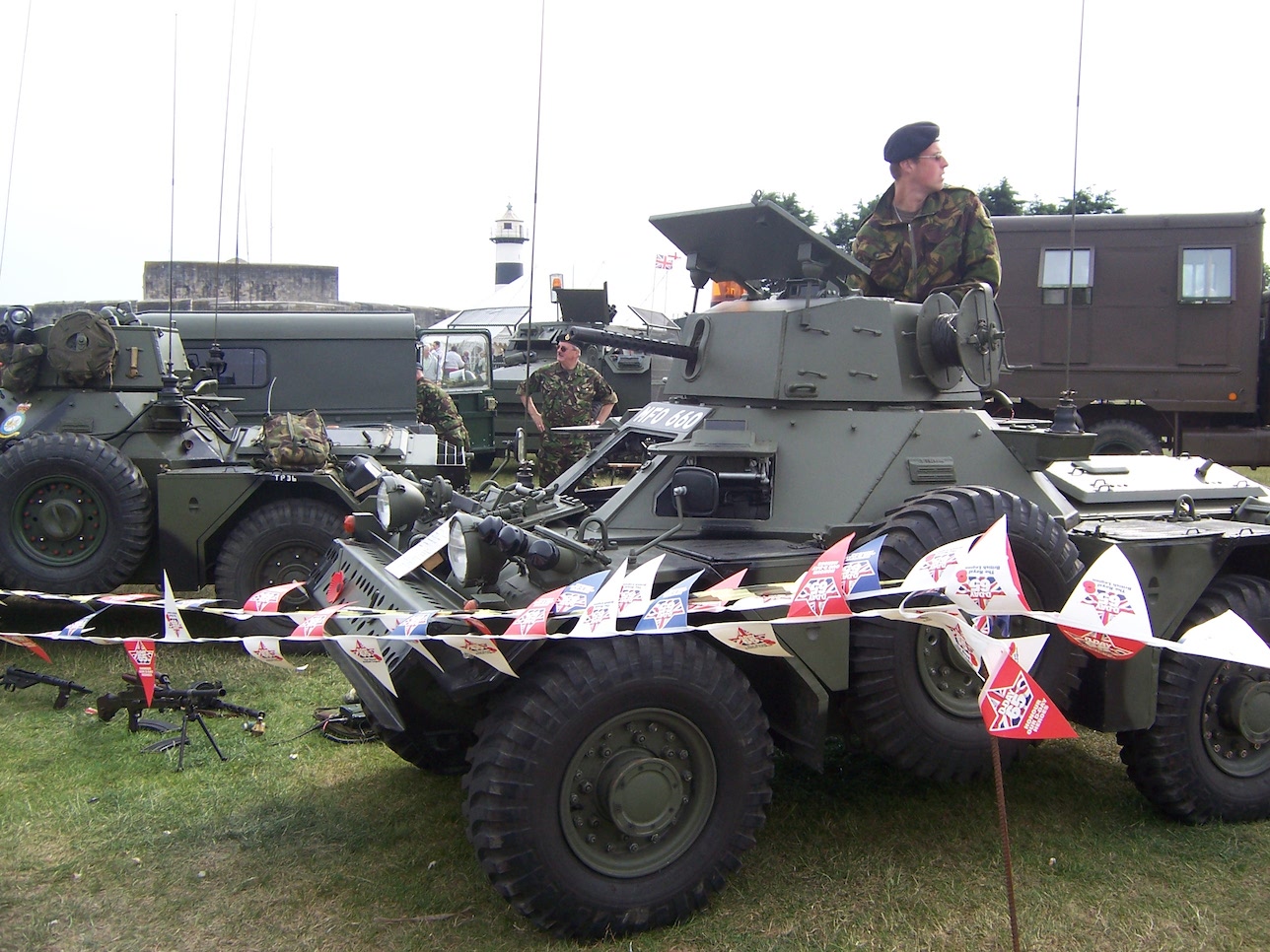 There were modern military vehicles next to those of yesteryear – many serving members of the British military were in attendance. One of the highlights of the programme was a demonstration by the infamous Red Devils, the daring display team of the Parachute Regiment. They were particularly daring on this occasion as strong winds threatened to disrupt their acrobatic display. 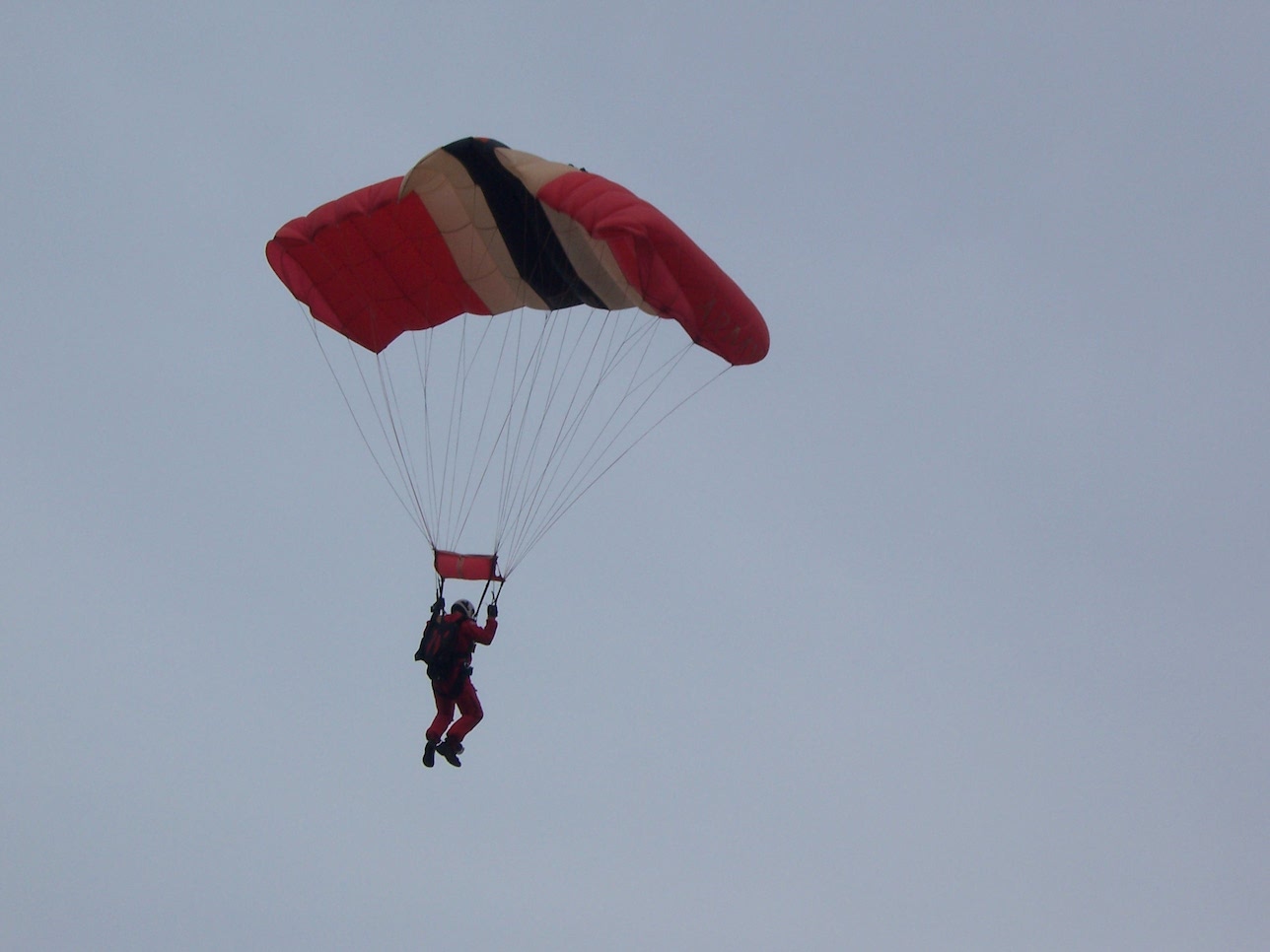 Incredibly most of the paratroopers, all of whom were combat veterans, managed to land in the designated field, which was surrounded by a large crowd of onlookers; however one unfortunate member of the display team was caught in a gust of wind and flew overhead, managing to avoid the mass of spectators and instead found a cactus hedge to cushion his fall. 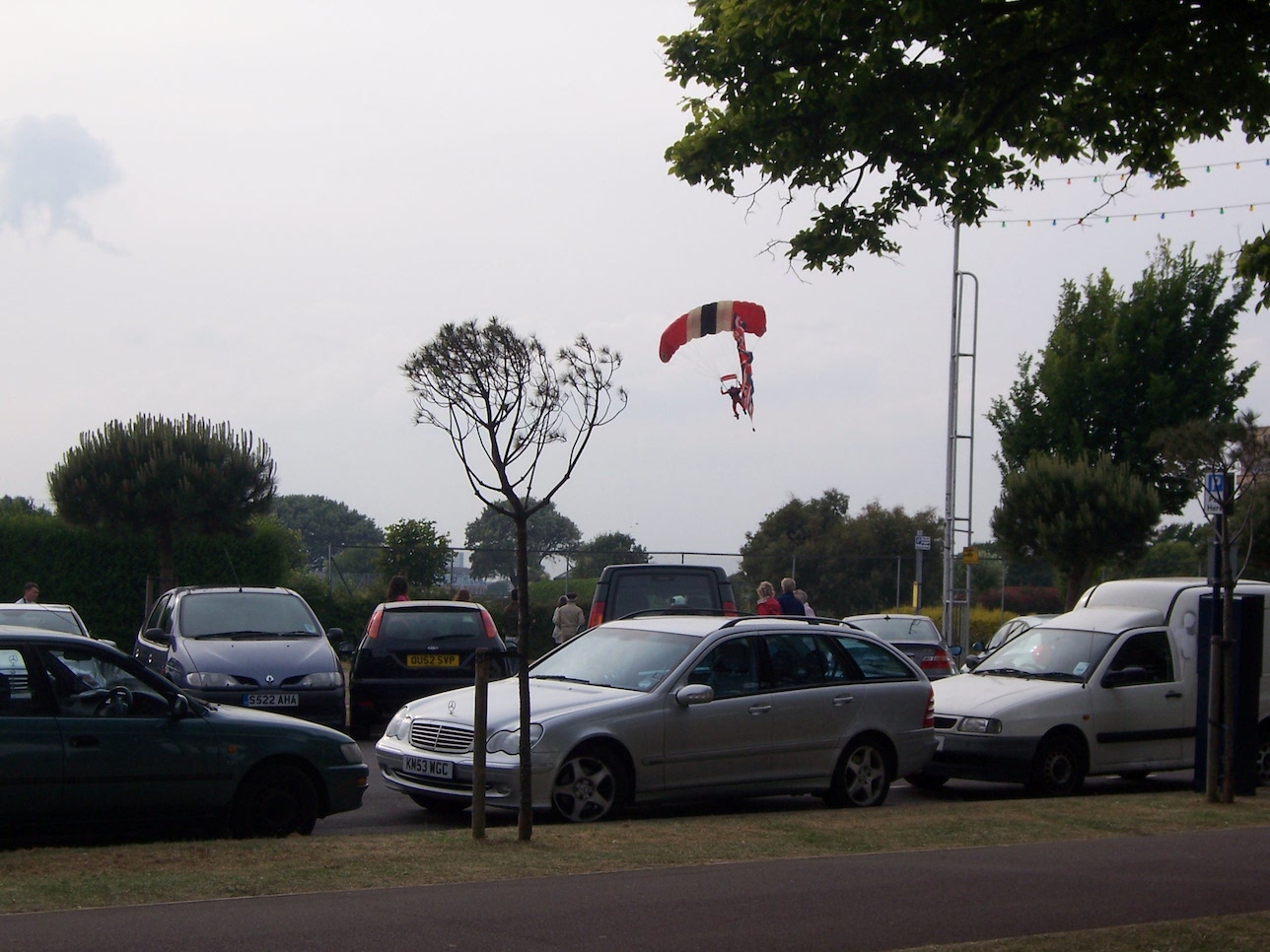 It was remarkable really, to have the quick thinking to make the right decision in an unfortunate situation and thus avoid putting others in danger even if it meant an undignified landing. If it was me then lets be honest – I wouldn’t have been jumping out of a plane in the first place – but if I had jumped out of the plane then by the time I realised the landing was screwed up I would have careered straight into the crowd, critically injured half a dozen people and taken out an ice-cream truck. Needless to say, the quick thinking Para wasn’t mocked but instead applauded – and held his head high.

There were two particularly moving aspects of the commemorations for me. One was the attendance of so many D-Day veterans. It was a privilege to share the occasion with them. The other standout moment for me was a fly past by an RAF Hercules, which dropped one million poppies as a tribute. For a moment it looked like it had released them too early but they had calculated the wind strength and direction perfectly and for a moment everyone was quiet and the sky was crimson. 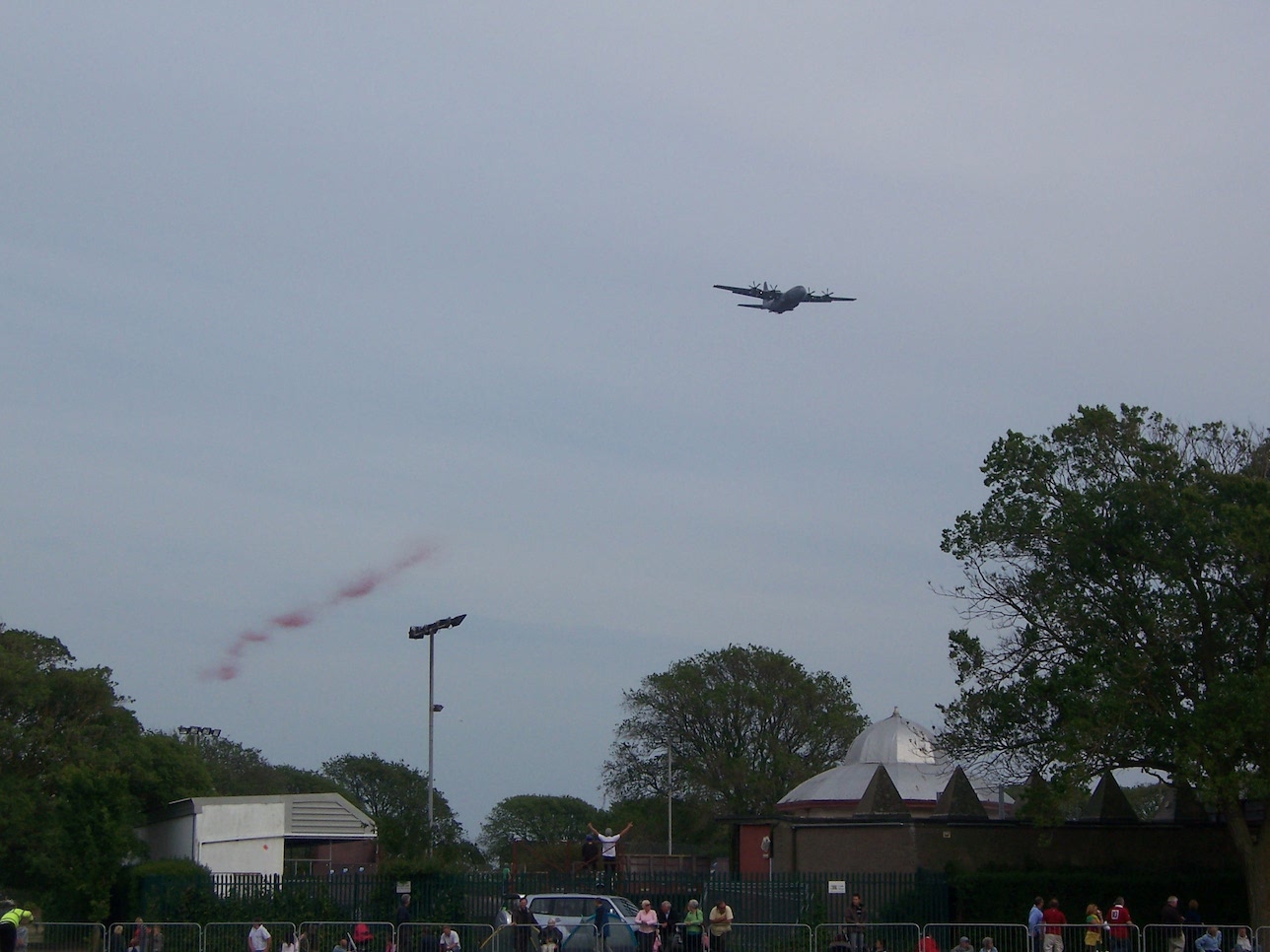 As I’m a collector by nature I couldn’t help but retrieve a couple of the poppies as mementos.  There were plenty to go around, they were scattered all over the place.  I’m sure that some of them even landed in the cactus hedge.