One hundred years ago today the Fairfield Freezing Works held a fancy dress ball in the Orange Hall in Ashburton. The men paid three shillings and sixpence each and the women provided the food. They were entertained by the tunes of Terris’s band, local favourites who played everything from waltzes and quadrilles to barn dances. It was an innocent scene and a fairly unremarkable one in a rural New Zealand town, but unknown to those on the dance floor their lives were soon to change forever. Two days earlier, on the other side of the world, an Archduke had been assassinated and the countdown to war had begun.

New Zealand dance cards and ball invitations are one of my much-loved ephemera collections. I started collecting them at stamp fairs and today find them in antique stores, second-hand bookshops and on Internet auction sites. What interests me is the story hiding behind each one. 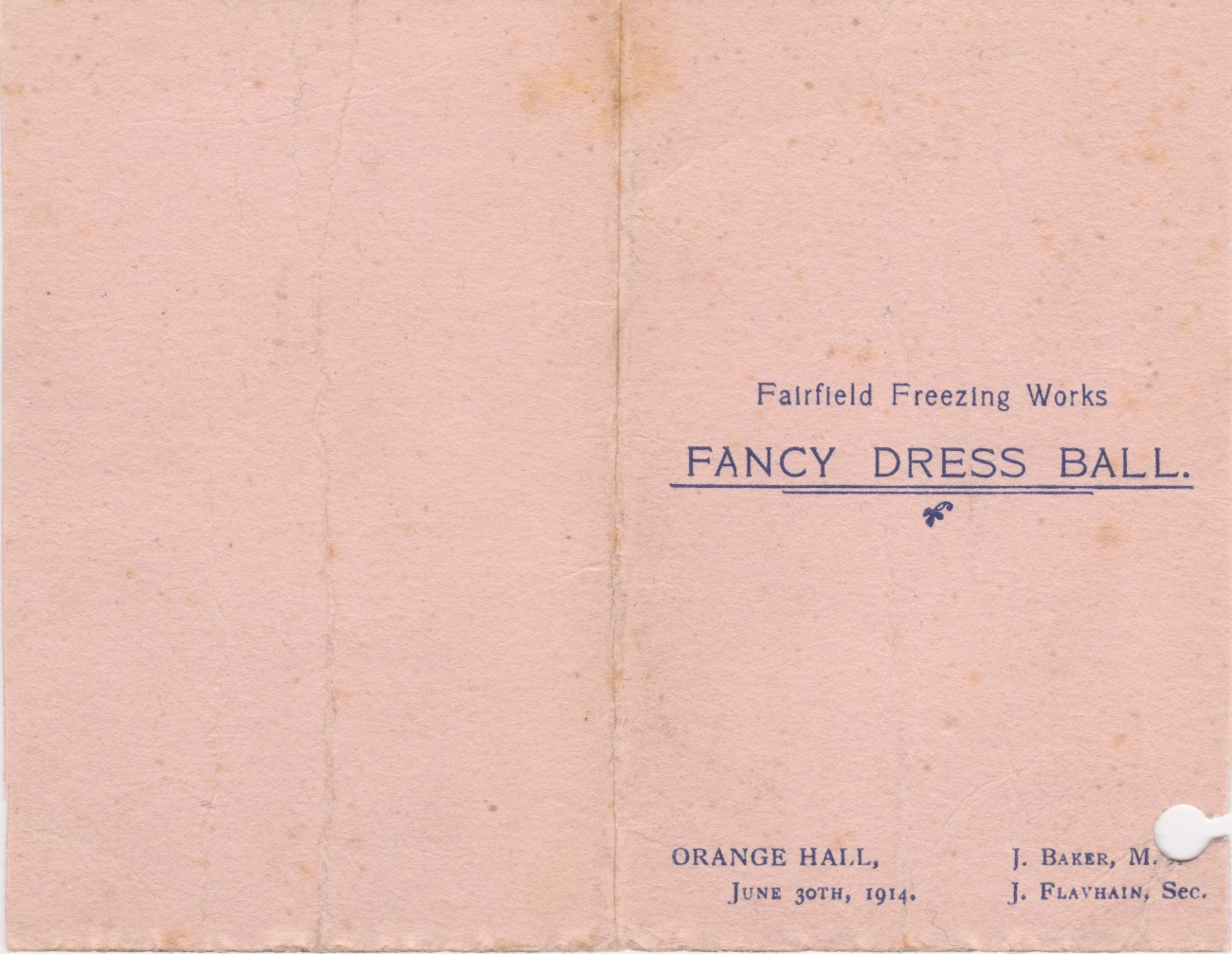 Dance cards will often have the details of the dance on the front, and in the centre will have a list of the dances to be held that evening with a space next to each where an attendee would write the names of suitors. There would often be a small pencil attached to the card by string – although the pencils are usually missing from surviving examples.  Presumably long since pinched for use on shopping lists.

I have to confess that cards like this one make me a little bit sad. It is common to find cards that haven’t been filled at all, and one can presume that the invitee was too busy to attend or that the card was a spare that was leftover. However, this example has just one dance filled in – resembling what I presume a dance card would look like if yours truly ever ventured to such social occasions.

The Fairfield Freezing works opened in March 1899 and was an important addition to the local industry in Ashburton, a small town on the Canterbury plains. As a child I lived not too far north from there and I remember the shingle back roads and hot dry summers fondly. Like many rural settlements in New Zealand, Ashburton continues to support the local farmers and agricultural industry – fulfilling the same role that it did a century ago. There may be more tractors than horses now but this is still a land of A&P shows, sheep, cattle and still some of the stereotypical stoic ‘she’ll be right’ attitude.

The day before the much-awaited fancy dress ball was held some disturbing news arrived from the other side of the world.  Archduke Franz Ferdinand of Austria and Sophie, Duchess of Hohenberg had been assassinated on 28 June 1914 in Sarajevo.

On the previous page in that paper you can see another reminder of the upcoming fancy dress ball.

I wonder how many of the locals read the news that morning before returning to work on their fancy dress costume, or if perhaps the assassination was discussed between dances that evening. However, it seems unlikely that anyone at the ball that night could have had any idea of just how large an impact that event on the other side of the world would have on their own community. The Ashburton Guardian reported on the ball the next day:

The detail of the ‘”flags of all nations” hanging from the ceiling seems especially poignant. In little over five weeks Britain, and by default, New Zealand would be at war and young men from around the country would rush to enlist and fight. The nations of the world would soon be divided into “us”, “them” and “undecided”.

Statistically it seems likely that many of those young men who had stumbled through the quadrilles and waltzes at the Orange Hall on 30 June 1914 would have fought and fallen in foreign fields. For many of the women who were there that night, the ball could well have been one of their last fond memories of life before the war changed everything and whisked loved ones away, some never to return.

The dance card remains as an innocent snapshot of a rural social scene one hundred years ago, of a community as it was just before it became caught up in a war on the other side of the world.