The 28th (Māori) Battalion is one of New Zealand’s most well-known military units to have served during the Second World War. Their heroism on battlefields in Greece, Crete, North Africa and Italy is the stuff of legends. Sadly there are only a couple of veterans from this unit still with us today, and soon the Second World War will no longer be in living memory – which means it is more important than ever to record these stories. ‘Ake Ake Kia Kaha E!’ by Wira Gardiner makes an invaluable contribution by preserving those memories for future generations.

There were four rifle companies in 28 (Māori) Battalion – A, B, C and D. Each with a strength of around 125 men. Often official histories focus on the story of a division, regiment or battalion, so it is a rare treat to read a book such as this which zeroes in on the experiences of a specific company. This is a treatment that doesn’t happen often enough – and ensures that the narrative is personal – following the same group of men (and transfers and reinforcements) through some of the most infamous campaigns of the Second World War.

Perhaps the most well-known company-level history is Stephen E. Ambrose’s ‘Band of Brothers’, which follows the experiences of E Company, 506th Regiment, 101st Airborne and was famously turned into the television mini-series of the same name. It is easy to draw some parallels – both the Māori Battalion and 101st Airborne have a well-deserved reputation as elite fighting forces, one of the strengths of ‘Band of Brothers’ was the way it focused on the experiences of an individual company, and the same is true in this work. Only this time the story doesn’t begin when the Allied forces are already winning, but earlier, when the advance of German and Italian forces across Europe and the Mediterranean seemed unstoppable. Easy Company first saw combat on D-Day during the Allied invasion of Normandy – as a comparison, B Company, Māori Battalion, first saw action three years earlier during the desperate defense of Greece and after that were on the receiving end of the largest airbourne invasion the world had ever seen at that time – on the island of Crete. It was here that their reputation as fierce close-quarters fighters was firmly established, specifically their fondness for the use of bayonet charges (usually preceded by a rousing haka). Those who survived the evacuation of Greece and Crete would then be further tested in the deserts of North Africa – where Allied forces achieved their first major land victory against the Axis – and then the Italian Campaign, including the infamous Battle of Monte Cassino. What an incredible trial these men endured. If HBO are looking for another subject for a mini-series, then they don’t need to look any further than here.

Gardiner does a great job at providing context to the story of B Company and the Māori Battalion, giving background information on the regions that the men came from, the racism and other challenges they faced before, during and after the conflict, and also chronicling the impact that the war had on the communities back home. Also of importance to their story are the inter-iwi relations – the companies of the Maori Battalion were largely based on tribal affiliations, with many of the men from B Company coming from the Te Arawa and Mataatua confederations of tribes, but also from Tauranga Moana, Coromandel, Waikato and King Country. This gave each company their own distinct personality – the soldiers of B Company were nicknamed the ‘Penny Divers’, as some members were from Whakarewarewa, where some boys and girls would dive into waters to retrieve pennies thrown by tourists. The relationship between each of the four companies was often also complicated by hundreds of years of inter-iwi rivalries. An example that Gardiner highlights from the North African campaign illustrates this beautifully:

“The men were sitting disconsolate without food or water when an old grudge against Ngapuhi was dissipated. A Company’s cook-truck drove over with the remark, ‘They tell us you blokes have got no kai,’ and half the contents were handed over to their old foeman, the Arawas. A ‘take’ that started when Hongi cut a track through the bush to haul Ngapuhi canoes on to Lake Rotorua was ended in the Egyptian desert over a century later.”

The book is wonderfully illustrated with a combination of some of the most iconic photographs of the company, but also with plenty of little-known material from the collections of the Rotorua Museum and from private collections. The grassroots research that has gone into recording and sharing these stories is exceptional, with the generosity of whanau and the role of the 28th Māori Battalion B Company History Trust deserving a special mention. 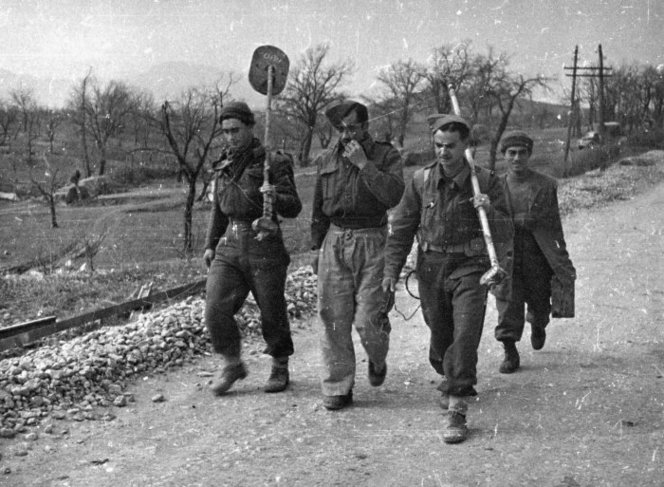 Tai Paraki (second left) and his mates, returning from a night clearing mines along the causeway into Cassino, February 1944. The others are (from left): Sutherland (A Company), Paraki (B Company), unidentified (D Company) and Mokomoko (B Company). Ref: DA-05296-F. Alexander Turnbull Library, Wellington, New Zealand. /records/23148079

There is only one surviving member of B Company still alive today – soon these stories will no longer be in living memory – so the work of Gardiner and others who have contributed to recording them is extremely important. This book will be a ‘must have’ for those with an interest in military history, or anyone who has heard of the Māori Battalion and always wanted to know more of their story, but more importantly it will be an absolute taonga for members of the communities that these brave men came from – and especially for anyone who have tipuna who served. One exceptional aspect of this publication is how so many individuals in the photographs have been identified, the inclusion of many personal recollections from interviews, diaries and letters, and at the back of the book is a gallery of portraits of the soldiers of B Company, including details of their service. I te hekenga atu o te ra, tae noa ki te aranga mai o te ata, ka maumahara tonu tatou ki a ratou – At the going down of the sun and in the morning, we will remember them.

You can buy a copy of Ake Ake Kia Kaha E! here – or even better go and support your local bookstore. It is published by Bateman Books and follows in the tradition of Nga Tama Toa: The Price of Citizenship: C Company by Monty Soutar, and similar histories of the A and D Companies are currently being proposed.