Seventy-five years ago the largest seaborne invasion in history was underway in Normandy, France. In the early hours of the morning, airbourne troops landed behind enemy lines and fought their way to strategic objectives and then just before dawn an opening bombardment roared along the coast – followed by amphibious landings at beaches code-named Utah, Omaha, Gold, Juno and Sword. The future of Nazi-occupied Europe was about to be decided. This was D-Day.

I was fortunate enough to visit some of the battlefields in Normandy a decade ago, just a couple of days after the sixty-fifth anniversary. The timing was coincidental, I was in Portsmouth for the anniversary commemorations, where a RAF Hercules dropped one million poppies overhead, and then the following day I took the ferry over to Ouistreham, briefly staying in Caen before heading to the beautiful town of Bayeux which I used as a base to explore more of Normandy. 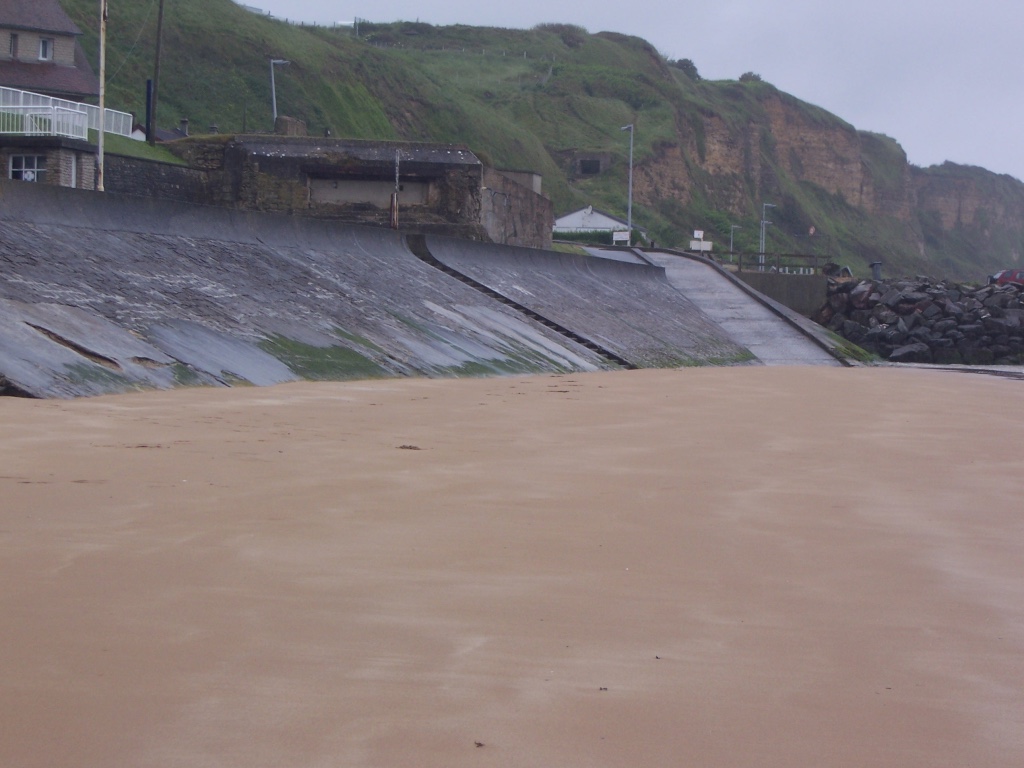 I’ve previously blogged about some of my experiences that week, including a visit to Omaha Beach, and the battle-scarred bunkers on the heights of Pointe du Hoc. This time to commemorate the seventy-fifth anniversary I wanted to share something a little more personal, a couple of experiences that helped to remind me of the human cost of the invasion.

The first experience that really moved me that week was at a 12th-century church at Angoville-au-Plain. I won’t lie, a gorgeous old medieval church like this would be on my ‘must see’ list anywhere, it is humble but beautiful. It also has a heck of a story to tell. 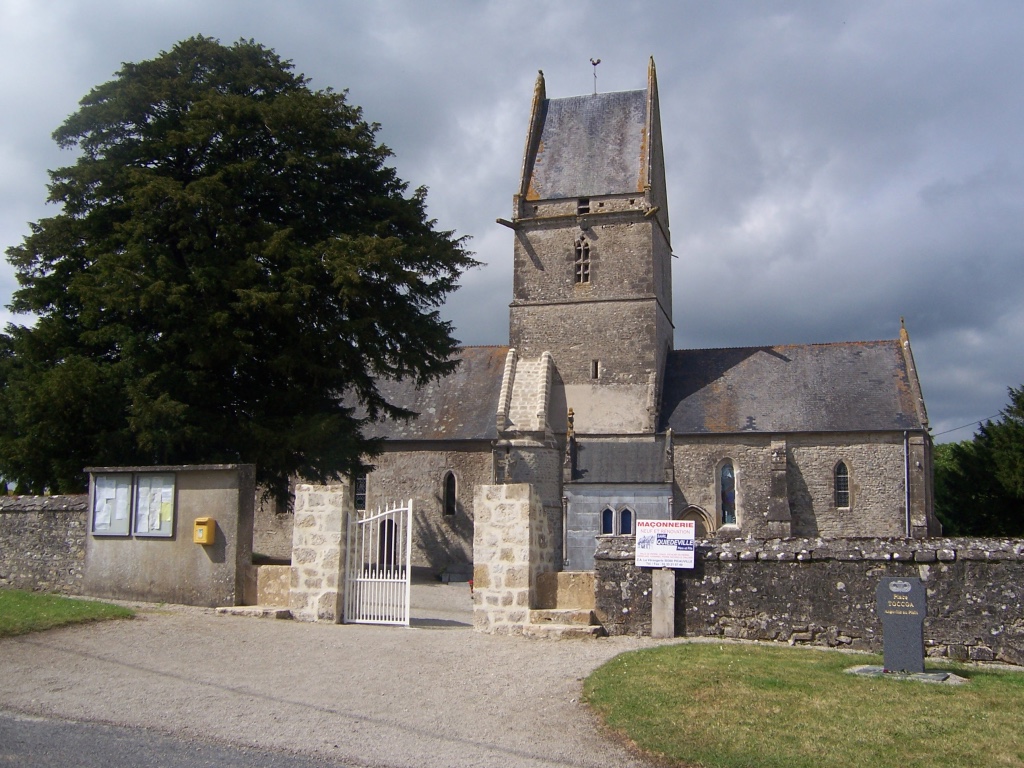 In the early hours of D-Day, American paratroopers from the 101st Airbourne landed nearby and a fierce battle was fought in the village. Among all the chaos and violence, two American medics, Robert Wright and Ken Moore, set up an aid station inside the church to treat the wounded, even as the fighting took place in the surrounding churchyard. Whenever there was a lull in the firing they left the church to look for wounded men to rescue. The Germans counter-attacked and most the Americans began to withdraw, but the two medics refused to leave and instead stayed behind to continue to tend to those who lay injured on the pews.

They were treating wounded American soldiers, but they were also caring for wounded Germans. All that mattered to them was that lives needed to be saved.

“They were young men much like us. The only difference was they were wearing a different uniform” – Ken Moore.

The Germans retook the church and allowed the two medics to continue their work unhindered. The church was captured and re-captured several times during the battle for the village, but the two medics kept working tirelessly to attend to wounded soldiers from both sides – all while putting their own lives at extreme risk. 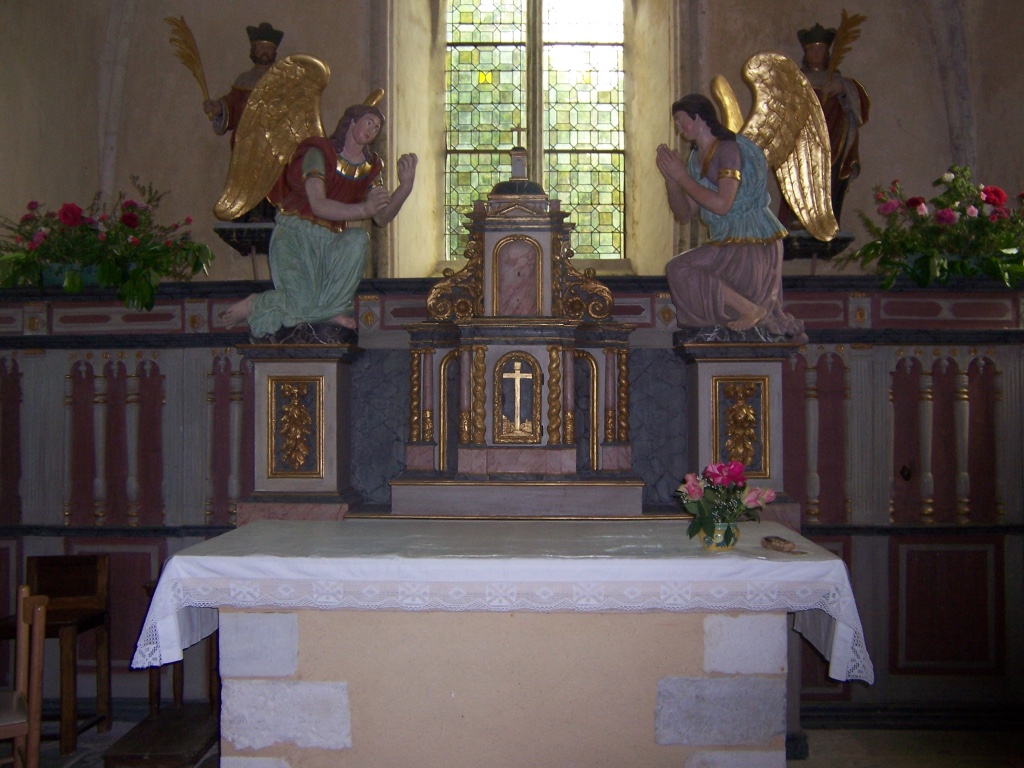 At one stage during the fighting a mortar round came through the ceiling of the church, threatening to kill all inside.

Mortar round damage in the ceiling, Angoville-au-Plain Church. © Lemuel Lyes

The round shattered a tile on the floor of the church, but fortunately for the medics and their patients it didn’t explode. 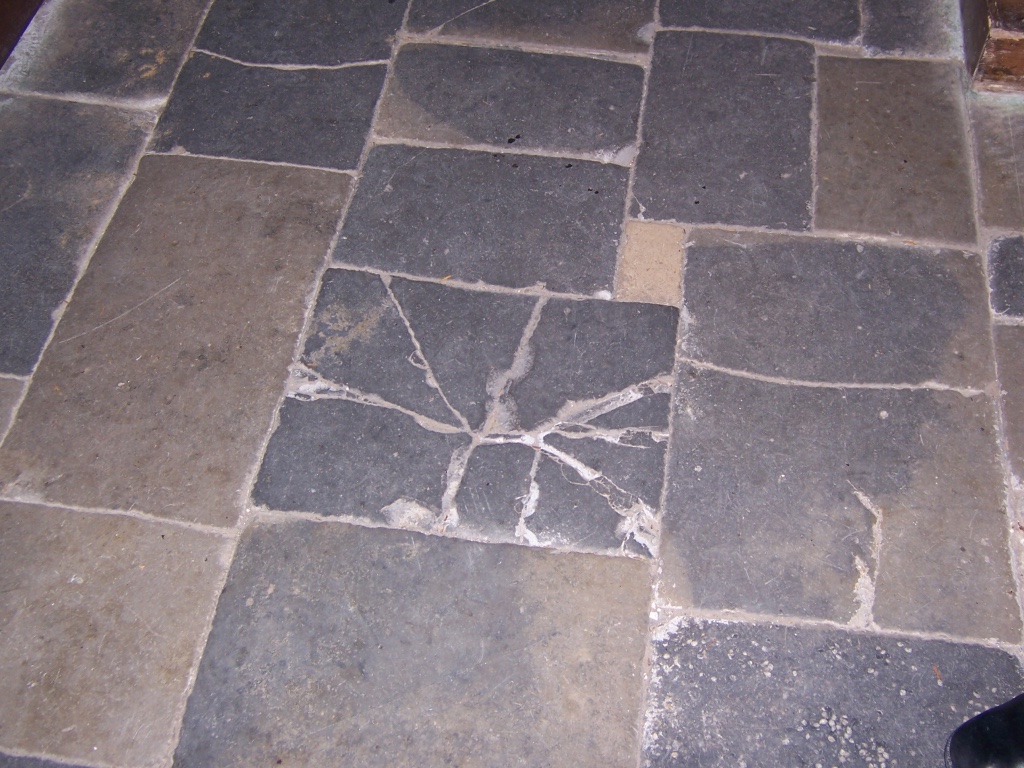 The church appears to have changed remarkably little since D-Day. Battle damage is still visible, but most poignant of all are the bloodstains that remain on some of the church pews – an extremely confronting reminder of what happened there that day.

This is a place where some lives were lost, where some were saved and where some were changed forever. A small church with a powerful story to tell. In this quiet corner of Normandy it is as if time has stood still. A place for quiet reflection. 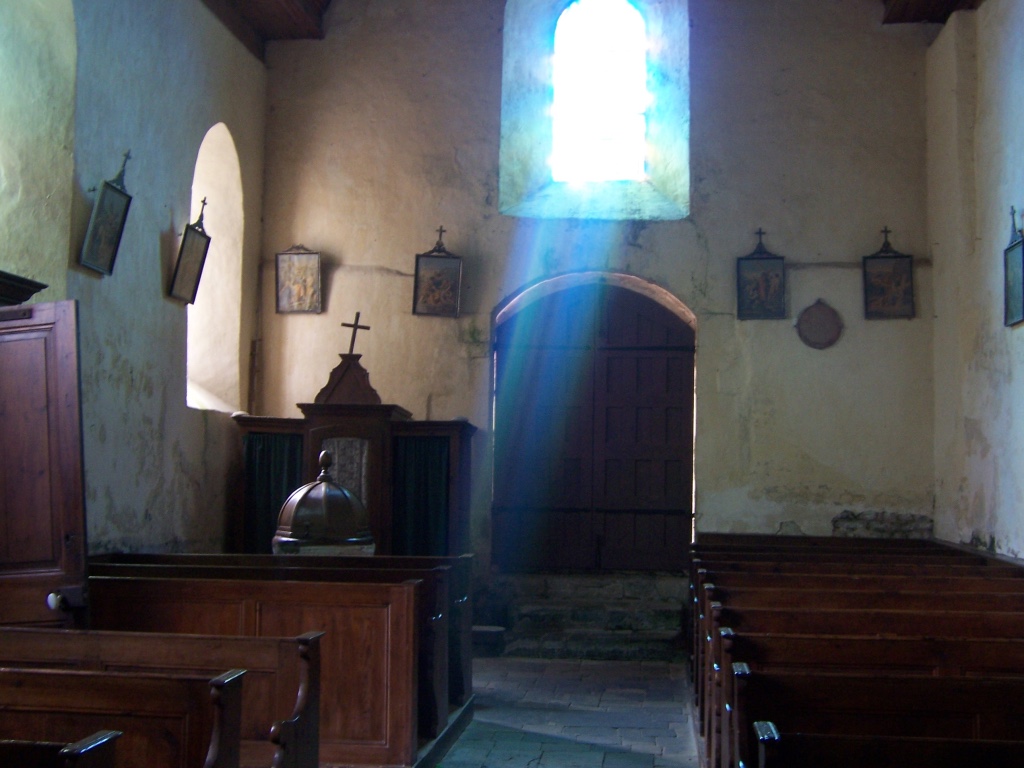 Robert Wright and Kenneth Moore were both awarded the Silver Star for their bravery, selflessness and compassion.

There were a lot of D-Day veterans in Normandy at the time of my visit, having just attended the sixty-fifth anniversary commemorations. Sometimes in groups traveling together in coaches, sometimes with their families, and sometimes on their own. Other visitors watched in respect and reverence, making way for them at the cafes and museums. Giving them space as they visited former battlefields and paid their respects at cemeteries. It is difficult to imagine what horrors they must’ve witnessed and experienced – and how it must have felt for them to be back where it all happened. While I was at the American cemetery at Colleville-sur-Mer (which famously features in the opening scene of Spielberg’s Saving Private Ryan) a cold Atlantic thunderstorm approached, but it did little to scatter the small groups who had come to visit the memorial and rows of white crosses. It seemed fitting to be there in pouring rain, with the sound of thunder rolling overhead. 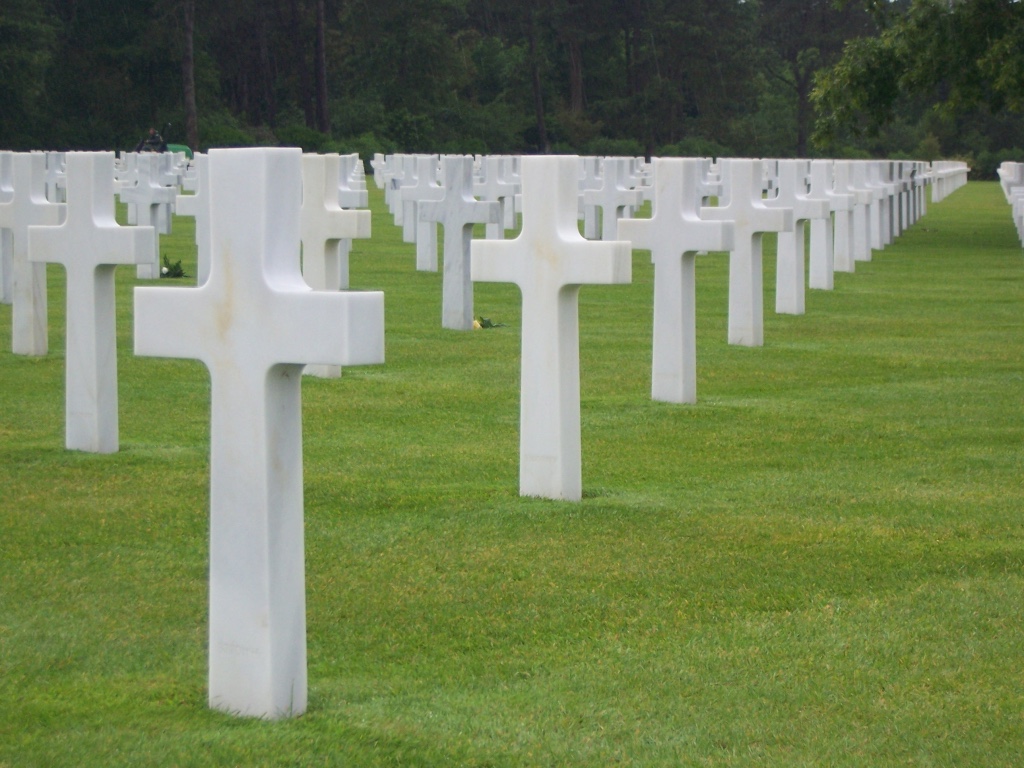 There were less visitors at the German cemetery, but it was here that I found myself standing next to an elderly man, looking down at a headstone marker, one in a field of thousands. He turned to me and spoke.

“Look at them all. They were just young boys.” 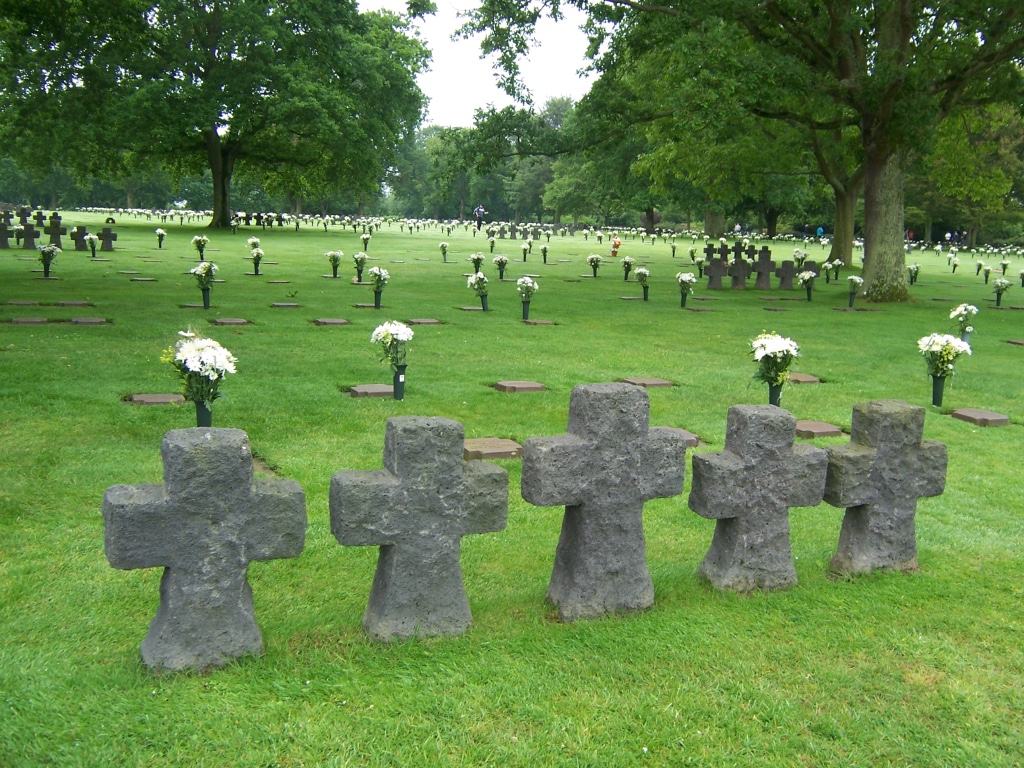 I spent a couple of minutes chatting with the gentleman and learned that he was a British D-Day veteran, who had been in command of a landing craft at Omaha Beach, where the Americans suffered such horrific losses. He was here visiting the German cemetery to pay his respects to his former enemies. Young boys, some only 16 years old, who found themselves on the wrong side of history, wearing the wrong uniform and in many cases forced to fight for a cause that they didn’t believe in. 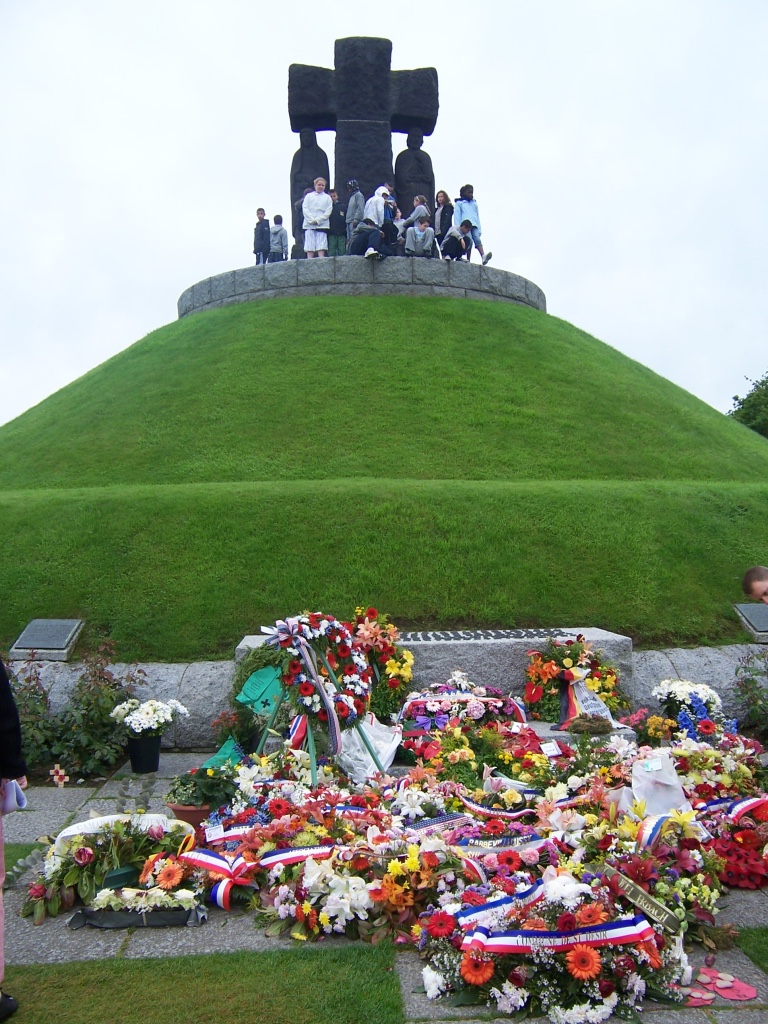 The two American medics at Angoville-au-Plain showed compassion for those on the other side even as the fighting waged around them, and now here I was standing next to a man who risked his life all those years ago and had now come back to show respect to those former enemies who had fallen. During my time in Normandy I learned a lot about the history of the invasion, the geography of the battlefields and the stories of those who fought there, but the most important lessons for me were much bigger than that and went well beyond my interest in the past. I like to think that I learned to be a slightly better person.

Today will likely be the last notable anniversary where a sizeable contingent of D-Day veterans will be present at the commemorations. When I was there a decade ago, a soldier who was 20 at the time of the invasion would’ve been 85 years old. Now they will be 95 years old. Soon there will be only a few veterans left who can recall what it was like to be there. So keep an eye out for the news coverage, podcasts (Dan Snow’s History Hit is a good place to start) and documentaries, take the time to read and listen to the experiences of those who were there and if you are lucky enough to still have someone in your family who was alive during the Second World War, regardless if they served in the armed forces or not, then speak to them, listen to their stories from those times and learn from them while you can. They were the greatest generation and the world is a better place thanks to their courage and sacrifice. We are lucky to still have some of them with us today and we could all learn a thing or two from them.