From Russia with Love: The T-34

This snapshot from my personal collection shows a knocked out tank somewhere on the Eastern Front during the Second World War.  Unfortunately the context of this image has been lost and I don’t know exactly where it was taken, who took it or when.  What I do know […]

I’m interrupting the usual ephemeral broadcasts to share some breaking news.  Talented Dunedin musician and all round good sort Bill Morris has released a music video for his upcoming album “Mud”. Bill has a healthy grounding in the real, the raw and the rugged – and that earthy […]

Letters from a Whaler in the South Seas

I spotted an auction on eBay that got me thinking.  The auction is for two letters from an American whaler writing back home about his experiences in the South Pacific. “I am in the ship Beaver of Hudson, cruising on the coast off New Zealand. Our luck has […]

This snapshot of history is an original photograph of a ship called the SS Kumara.  Its story includes hundreds of thousands of carcasses, an insight into the beginnings of an invaluable industry and a debate over how comfortable life would be in a floating freezer. The birth of […] 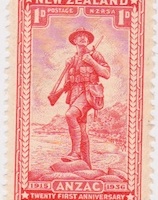 Why Children should Collect Postage Stamps

If you are the owner of a child that is obsessed with dinosaurs then you probably already know just how many complex names and facts a child can learn and recite.  Perhaps you have wondered If only there was a way to expand that self propelled learning potential […]

Witness to a Gold Rush

This is an original receipt from 1886 for one year’s subscription to a weekly newspaper called the Otago Witness.  Twenty-five years earlier this very newspaper printed what is arguably New Zealand’s most influential letter to an editor… The date was 8th June 1861 and the author of the […]

What exactly is Ephemera?  Why collect it and what can we learn from it?  This is the story of the little pieces of paper that fly in and out of your life on a daily basis.  Right now you are probably surrounded by it! ‘Ephemera’ is a word […]

August 29th 1935 – The Dutch liner Nieuw Zeeland approaches the Australian coast, ending another routine voyage from Singapore.  The passengers are dining on delicacies such as Iced Asparagus with Remoulade Sauce and ‘Fantasie’ Ice Cream.  They have no idea that peaceful Pacific cruises will soon come to […]

This is the beginning!  After several years of mutterings, excuses and hot cups of apathy I have finally arrived in the blogosphere. I’m really excited about this and am looking forward to sharing some of my passions and interests with whomever might enjoy them. I have a passion […]