This Christmas card is one of my favourite New Zealand greeting cards from the First World War. I’ve shared this card before, but it seems appropriate to share it again on the centenary of its original use. Also I have a new scanner now, so hopefully the quality is better than before. The artwork is by cartoonist George Patrick Hanna and the card was published for use by members of the New Zealand Division in France. 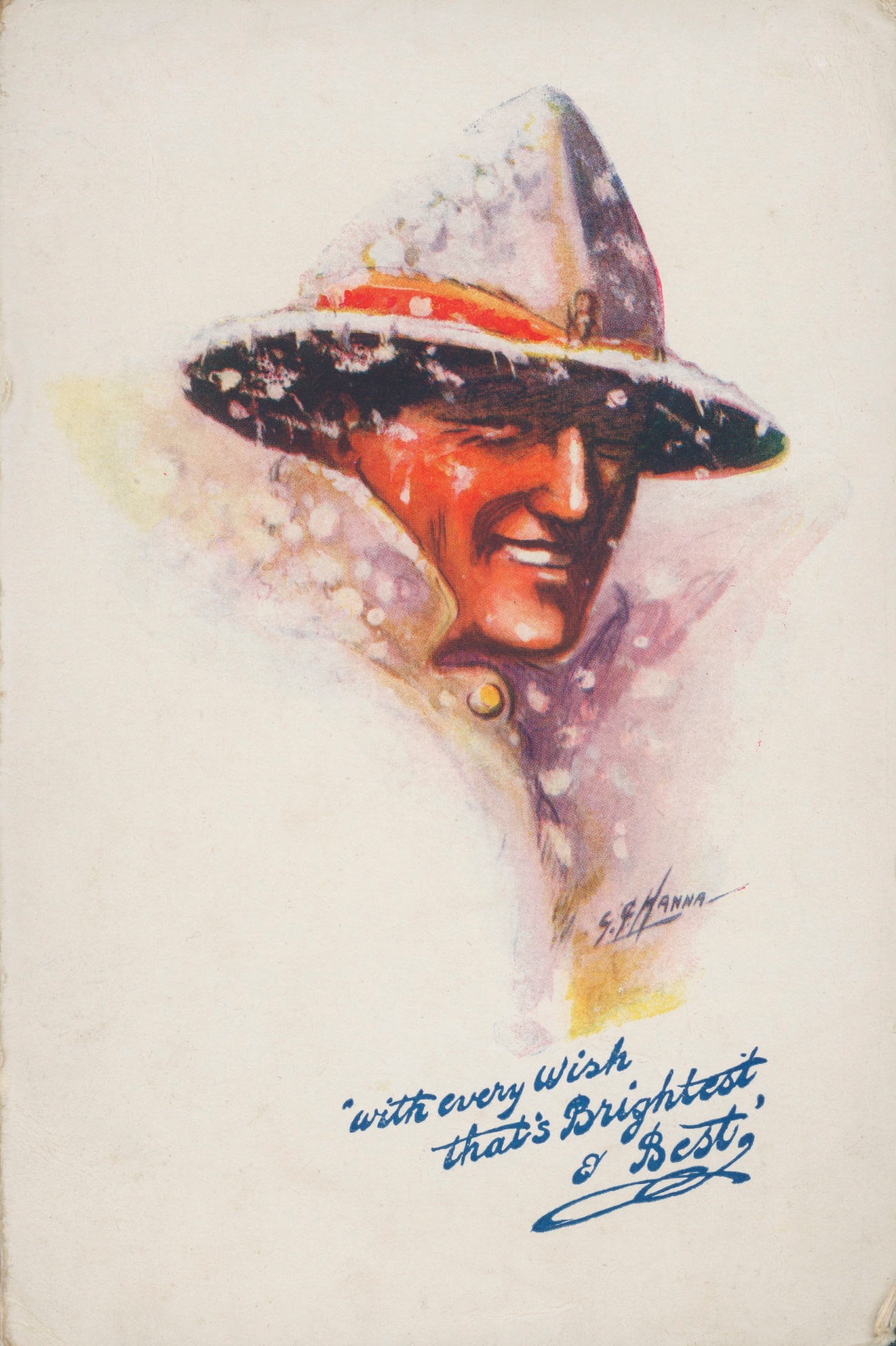 Its a delightful illustration – showing a grinning New Zealand soldier wearing the iconic lemon squeezer hat dusted with snowflakes. Much of the classic Christmas iconography doesn’t make sense down here in the southern hemisphere – no sleighs, snow (although Dunedin threatens to sometimes) or offensively coloured festive jumpers during the antipodean summer. What I like about this card is how it captures the small delight of a New Zealand lad enjoying Christmas in the northern hemisphere, possibly for the first time. Something that might make some of the folks back home just a tiny bit jealous, just for a moment, despite the unpleasant circumstances of his overseas experience.

The war was over but this card was likely printed and sent before hostilities ended. It took several months for the mail to make it back to New Zealand, so most soldiers sent their Christmas cards and letters sometime between late September and early November.

When the fighting finally ceased on 11 November the soldiers didn’t simply turn around and head home. The New Zealand Division marched through Belgium and into Germany, as part of the Allied occupation force. I have a few postcards in my collection with messages that I suspect were penned by members of the New Zealand Division during the early stages of the occupation. This first one shows a view of Dolhain, the industrial centre of Limbourg, Belgium. The New Zealanders passed through Limbourg, and many of them stayed there, towards the end of their long march into Germany.

Dear Edith, Just a few views of Belgium that I got on my way up here, will send a letter next time. Best love from your brother Charlie

In Belgium, the New Zealanders received a warm welcome as liberators, their tired feet buoyed by cheering crowds and singing schoolchildren. A bandsman from Balclutha recalled in a letter home how the locals “nearly went off their heads” when the New Zealanders played the Belgian national anthem. The reception waiting for them in Germany was a little more subdued.

The New Zealand Division celebrated Christmas in Cologne, Germany. Well, sort of. The chaos of the occupation march had wreaked merry hell with the supply lines and unfortunately the turkeys that had been ordered for Christmas dinner didn’t arrive in time for the occasion, so most of the New Zealanders held their festive feast on New Year’s Day instead.

In the course of a letter written from the barracks at Bensberg, about twelve miles from Cologne, where the New Zealand Rifle Brigade was recently quartered, a member of the Rifles says: – “Today (New Year’s Day) we had our Christmas and New Year dinner combined, and had really a good feed of turkey and plum pudding. We had it in a big hall here that was set out with tables and seats. We also had apples, oranges, nuts, raisins, beer, etc. It was rather funny seeing all the boys sitting down eating their dinner in the big hall whose walls were decorated with pictures of German generals.”

This postcard of Cologne Cathedral was used three days later, on 4 January 1919. Again, I can’t be sure this message was written by a member of the New Zealand Division, but it seems probable, especially as the message on the back was written at Bensberg, where the Christmas/New Year’s Day feast described above was held.

Dear Father and Mother, This is part of the main entrance to the Cathedral and where I entered yesterday it is all carved out of stone and must have taken years to build and the inside you want to see to believe. Jim

The spectacular Cologne Gothic Cathedral was one of the most popular attractions in the city for members of the occupation force.

“I felt that I must stand on the Cathedral steps and cheer.” Oh yes! we have some grousers in the Division, but the vast majority are enjoying the experience of living in enemy country, and seeing the sights. In days to come what plain and unvarnished tales – I beg your pardon I thought you spoke – will be told by the home fire side about our doings and adventures in Germany. What collections there will be of souvenirs – especially of post cards – of the various places in which the Division has been.”

The New Zealand Division’s role in the occupation of Germany is usually little more than a footnote in the history books and certainly not immortalised to the extent that the enthusiastic reveller quoted above had hoped. However, as a postcard collector I have noticed that postcards of Cologne from around this time, especially views of the cathedral, are slightly more common in New Zealand than you’d expect. Not much, but just enough to be a noticeable trend. So perhaps he was right on that point.

There is one last New Zealand greeting card from Christmas 1918 that I’d like to share from my collection.

The inside simply has the phrase ‘Slog On’. It had been an exhausting four years for the soldiers serving overseas, an exhausting four years for the folks back at home, an exhausting four years for everyone, but it is the front of this card that I particularly like. It is simple yet beautiful, the illustration of the hei-tiki and the Māori greeting a refreshing change from the military-themed patriotism frequently featured on the front of other greeting cards printed during the war. I can imagine George’s mother receiving this back home in New Zealand and allowing herself to smile – the war was finally over.  Hopefully George was on his way home. This card is in exceptional condition. It must have been treasured.

One hundred years ago, Christmas will have been bittersweet for many who had lost loved ones to the war or influenza, and frustrating for the turkey-deprived troops in Cologne, but also a relief for many who had endured so much. They had survived. The new year began with an overdue celebratory feast for the New Zealand soldiers in their German barracks, but more importantly it offered a fresh start, with the promise of long-awaited reunions and the opportunity to forge a new future with those that mattered most. I like to think that sentiment is worth remembering. Wherever you are I wish you all a very merry Christmas and a New Year filled with peace, happiness and new opportunities.